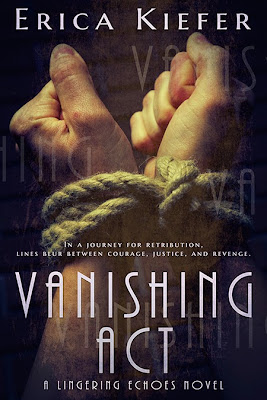 A fresh start at college is exactly what Kate needs to ease the burden of her family secrets.

When she meets the confident and charming Aaron Jackson, she weaves a new history for herself to fit into his seemingly perfect life. But the past refuses to stay where it belongs, causing a rift between their contrasting worlds.

When Ben reappears in Kate’s life, she is only pulled deeper into the childhood that she’s tried to forget. Driven by the abuse and pain that still lingers within him, Ben seeks Kate’s help in making a change. But in this journey for retribution, lines blur between courage, justice, and revenge.

Bound by their shared and damaged youth, Kate is forced to choose sides, and fast. The final act is almost here, and time is running out.

Vanishing Act by Erica Kiefer Vanishing Act is a Lingering Echoes novel that can be read as part of the series or as a stand alone story. Fueled by the scars from an experience in foster care that no child should have to endure, Vanishing Act touches on serious issues that can continue to impact abuse victims well into their adult lives. Vanishing Act is an emotional drama with a sweet romance mixed in.


Excerpt:
My vision blurred like I was walking outside in the rain. It may as well have been raining, with how emotionally drenched and defeated I felt as I marched out of my neighborhood. I didn’t know where I was going. Despite the familiar street, I felt lost and confused. I just knew I needed to keep moving, afraid that if I stood still, the storm of emotions would drown me.

Aaron became a silent companion at my side, keeping fast pace with my hurried steps. My thoughts stewed inside my head, a dangerous concoction of fear, hurt, and fury. My whole life I had worked to salvage this family. My entire purpose for going to college was to help us survive, even if our heads were barely above water. But it seemed the minute I’d left the house, both father and son were falling apart, sabotaging my efforts.

Aaron seemed to sense I was about to boil over because he eventually took my hand and pulled me onto the grass. He stood in front of me with both hands on my shoulders, trying to look into my eyes. I shook my head, knowing if I spoke one word that too many more would spew out of my mouth—bitter and resentful—and I’d never be able to take them back. Aaron’s hands moved to my back and he wrapped me in his arms, pulling my face against his chest. His strong hands pressed into my shoulder blades, holding me together like fractured porcelain.

I let the warm tears fall, one by one. I hoped that by keeping my eyes pulled tightly shut, that the tears wouldn’t find an exit. But they did—streaming one after the other until each droplet became a river, a driving current of emotion merging together. It would have felt dangerous without Aaron’s embrace, but I felt safe anchored in his arms.

Erica Kiefer was born on Christmas Eve in Southern California to an American father whose ancestors arrived from Europe during colonial times and a Thai mother who moved to the US during high school. Adding to her rich and varied heritage, Erica grew up living abroad in Asia, including Taiwan, Fiji, Thailand and Indonesia. She gained a great respect for the beautiful mosaic of cultures found in various parts of the world. After graduating from International School Bangkok, she attended Brigham Young University in Utah, where she earned a degree in Recreation Therapy. Her career as a Recreation Therapist has allowed her to work with at-risk youth since 2007. Erica made the best decision of her life by marrying her husband in 2005 and is currently a mother of three, one of whom awaits her in heaven. Erica also loves singing, reading, writing, and satisfying her sweet-tooth with chocolate-chip cookies. Playing collegiate rugby was one of the most memorable experiences of her life, thus far. Erica’s first book, Lingering Echoes, was signed by Clean Teen Publishing and released in early November 2013.

Giveaway is International.
a Rafflecopter giveaway
Posted by Unknown at 12:01 AM