Interview with J.A. George, Author of Gifted: The Hayven Series 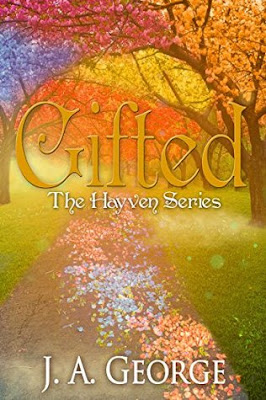 “Why do birds fly? Why do lions hunt deer? Why does the sun shine and the moon glow? Because it must. I wish I could tell you why, I truly do. It mustn’t be easy, such pressure weighted on such young shoulders, but we do not always choose the lives we must lead.”

Avery Gray had no choice but to be different. She was not born that way; she was chosen.

After having met a special, silver-haired woman, and the handsome and enigmatic Theodore-James Connors, Ava finds herself in Hayven, a city separated from the rest of the world, where only gifters – ordinary people with extra-ordinary gifts – can go. With Theo, his friends, Hayven, her gift, and the ability to ‘travel’ in different colours, Ava must now accept that she can no longer classify herself as normal. As friendships develop, and Theo and Ava become closer than she anticipated, it turns out her new gifted life comes with a catch. With no choice or say on the matter, Ava must save a city she is starting to fall in love with; a city that has almost begun to feel like home.

Hi Jessica! Thank you for taking the time to talk with us!

What inspired you to write GIFTED?
I was once told to write a story that I wanted to read. Now, of course not every reader has the same taste when it comes to books but we at least have similar tastes and I believe that if I enjoyed reading Gifted then hopefully (fingers crossed!) somebody else will too.

What can you tell us about your book in 140 characters or less?
It's about 7 friends who, & the world they live in, face a major threat. It's young adult mixed with fantasy, romance, dystopia & adventure.

How are you similar to or different from your main character?
I try not to make my characters resemble myself or anyone I know, simply because it's a lot more fun to make up my characters from scratch! However, I like to think that the characters reactions are realistic because I try and write it like it's me reacting to whatever life-changing news they are receiving.

If your book was being turned into a movie, who would you cast as the leading roles?
I couldn't say because the images of the characters in my head don't match those I've seen on T.V. So perhaps some unheard of actors and actresses? That would be nice.

Are you excited about any new books being released soon?
I am definately excited for Gifted part 2 (it's a four part series) to be released! But that's not happening anytime soon! It still needs some work.

Favorite place you have ever visited?
If I'm answering this question to impress you then I'd say Paris. If I'm being honest? My local bookstore.

What’s the worst job you’ve ever had?
Telesales. Ugh! I was one of those annoying people who called you up and asked you if you needed insurance whilst you answer the phone call, wonder how on earth I got your number before either politely declining or just slamming the phone down. I lasted a day and a half  in that job because I just couldn't do it! I hated annoying people! But, I do now know it's not an easy job so when telesales people do call me, I politely decline. Before slamming the phone down.

This or that:
Christmas or Halloween?
Christmas!
Crayons or markers?
Markers, but only because I can't remember the last time I used crayons! But I do remember that you were the cool kid in class if you had that awesome 24 pack.
Cup or cone?
For ice-cream? Is bucket an option? No? Then cup.
Call or text?
Text!
Hot or cold?
Cold.
Apples or oranges?
Since I'm allergic to the skin on apples, it has to be oranges by default. I do like oranges though.

J.A. George is the author of the four-part series, GIFTED: THE HAYVEN SERIES. Jessica spent years of her life reading book after book before sitting on her bed one morning, opening her laptop and typing Chapter One into her word document. Now, not only does she read book after book, she now writes book after book too. When she's not writing, she's trying to break her record of finishing a tub of Oreo ice cream in less than forty-five minutes.