The book I am anxiously awaiting is... 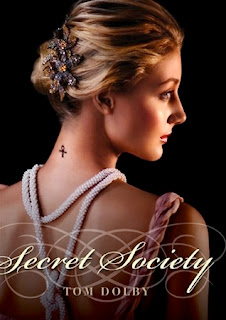 An eccentric new girl. A brooding socialite. The scion of one of New York's wealthiest families. A promising filmmaker. As students at the exclusive Chadwick School, Phoebe, Lauren, Nick, and Patch already live in a world most teenagers only dream about.

They didn't ask to be Society members. But when three of them receive a mysterious text message promising success and fame beyond belief, they say yes to everything--even to the harrowing initiation ceremony in a gritty warehouse downtown and to the ankh-shaped tattoo they're forced to get on the nape of their necks. Once they're part of the Society, things begin falling into place for them. Week after week, their ambitions are fulfilled. It's all perfect--until a body is found in Central Park with no distinguishing marks except for an ankh-shaped tattoo.

This book has been out for ages and has been on my TBR list just as long. I love books about secret societies, they're so intriguing!
Posted by Unknown at 12:01 AM