The Wanderers
by Kate Ormand 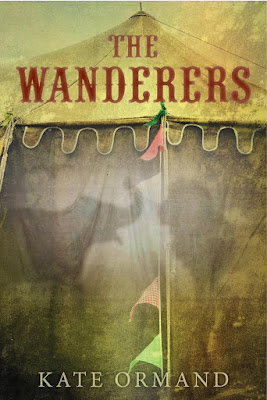 My Thoughts:
Sixteen year-old Flo’s life is anything but ordinary--she is just one of many performers in a traveling circus. On the outside, this seems like any normal animal circus, but the secret lies in the fact that there aren’t any actual animals in tow. Instead, the humans shape-shift into their animal forms when it is time to perform. Shifters are unknown to the human world, so when a human spots Flo practicing her routine, panic seizes the circus and anxiety causes Flo to accidentally shift from horse to human in front of an unsuspecting audience. Her mistake unleashes the fury of the hunters (a government run group titled EOS whose purpose is to eradicate the shifters and make sure the humans never find out about them). Luckily Flo and a few others are able to flee in time. Together they embark on a journey that reveals secrets they never thought possible and causes them to question everything they’ve been taught and, worst of all, who they can trust.

I thought the entire book was very well written and well-thought out. I really liked the premise of this and the fact that the characters shape-shifted into many different types of animals because the only other books I’ve read about shape-shifters seem to focus solely on werewolves. The beginning is pretty slow, but then everything picks up and doesn’t really slow down until the very last page (it was a bit rushed in my opinion). For anyone that likes a lot of action, this is the book for you. As soon as things go wrong during Flo’s performance the fighting and killing is almost constant (some of it is kind of graphic so be aware of that if it is something you are not comfortable with). There was a lot of death which I thought was kind of excessive, but at the same time believable since it was trained hunters against a bunch of scared kids--in their animal form or not, they still weren’t warriors. The only thing I would have liked to see was a greater emphasis on the circus itself because that was something I was pretty excited about.

Flo isn’t my favorite character, but she does a lot of growing throughout the story which I admired. She starts off terrified of just performing her short act in front of complete strangers, but by the end she is completely willing to put her life on the line for all of her friends. This is stemmed from the fact that she feels responsible that everyone is running for their lives and wants to help make it as right as possible, but I don’t think everyone would step up to the plate that way. She refuses to run when offered the chance mutiple times and fights until the very end.

I’m not sure if this will have a sequel or not (the ending seems to be open for one), but I will most likely pick it up because I am intrigued by this shifter world and how Flo and Jett’s story continues.