Shut Up
by Anne Tibbets 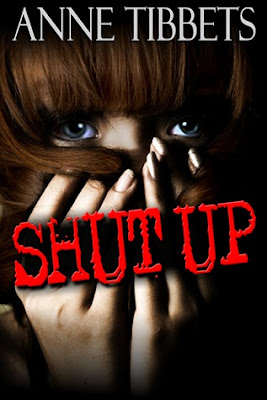 
Mary’s older sister gets herself pregnant and then decides to marry The Creep who knocked her up which causes her parents to freak out majorly. And to top it all off, Mary can’t seem to do anything right and is constantly getting yelled at by her mom and the now pregnant Gwen. Her brother just tells her to shut up and blend in, but Mary isn’t good at either. Unfortunately, all her attempts to get help are ignored which causes her to plan different forms of escape.

This story is told in alternating points of view by Mary and her older brother Paul. The chapters are also divided into the present and the past. It starts off with Mary running away from home which is the present and then shifts to explain exactly why it is that she decided to run away in the first place. Other than that, there isn’t much of a plot.

I thought Mary was very mature for a 12 year old especially after everything that she goes through. I don’t know what I would do if I was constantly being told that I was stupid and useless and made to feel unwanted. I was really happy with the decision she makes at the end and I was rooting for her to come to the conclusion that she does. As for the other characters, I didn’t really like any of them. Gwen was a complete bitch, Rose was a little tattle tale, Paul, who was supposed to be her one and only ally, never did anything and all the other adults in Mary’s life didn’t bother helping her even though they all knew something wasn’t right.

And lastly, I love, love, love the cover. I feel that it shows how much pain Mary is in which makes it powerful.

Click here to read Anne’s author interview!
And thank you to the author for sending me a copy for review.
Posted by Unknown at 8:33 PM