Excerpt of Arrow of the Mist by Christina Mercer 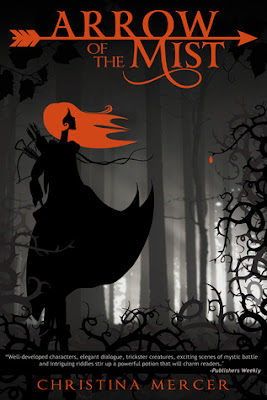 Title: Arrow of the Mist

Terror strikes the Celtic inspired kingdom of Nemetona when barbed roots breach the veil of a forbidden land and poison woodsmen, including 15-year-old Lia’s beloved father. Lia and three others embark on a quest to theforbidden land of Brume to gather ingredients for the cure. But after her elder kinsman is attacked and poisoned, she and her cousin, Wynn, are forced to finish the quest on their own.

Lia relies on her powerful herbal wisdom and the memorized pages of her late grandmother’s Grimoire for guidance through a land of soul-hungry shades, trickster creatures, and uncovered truths about the origin of Brume and her family’s unexpected ties to it. The deeper they trek into the land, the stronger Lia’s untapped gift as a tree mage unfolds. When she discovers the enchanted root’s maker, it forces her to question everything about who she is and what is her destiny. Ultimately she must make a terrible choice: keep fighting to save her father and the people ofthe lands or join with the power behind the deadly roots to help nature start anew.


Excerpt:
Granda Luis halted and turned Dobbin to face his troop. The chilled air tugged at his cloak and swept through his winter white hair. His eyes shone from his face and the young trio drew their horses back a few steps.

“We’ve a straight and narrow trail ahead. We’ll go in single file—”

“A narrow trail?” Lia cut in. “But, I thought it’d be some kind of, well, secret passage or something.

How is it that only you and Grandma made it through the fog safely? Why didn’t others just follow behind, track your steps?”

“There were many who tried.” His voice turned morose. “Even after all m’warnings. Men hovering in the wooded outskirts, creeping in the grasses, waiting till I was snug enough within the fog before charging in behind me, their lives over before I could utter a word. Because you see, as with most gates, there are guards.”

Lia’s eyes widened. She cast a glance at Wynn, whose jaw hung, and at Kelven whose face was like stone.

Granda Luis added, “But not to worry, our passage was assured long ago.”

Lia opened her mouth, but held her tongue as Granda turned Dobbin around and headed him toward the perilous boundary. Guards? How is that possible? The notion of it chilled her like an icy deluge.

Then the words from the Grimoire echoed inside her head:

Fogged, bogged gates of Brume, barrier to my home;

Timeless, faceless watchers loom, but I am allowed to roam.

“Come on, Dobbin. ’Tis all right, boy, steady now,” Granda Luis cajoled. Dobbin snorted and flipped his head up and down. “I was afraid o’this. He’s strong as a bull, but nervous as a cat, nothing like his fearless sire who’d brazen out the fog without a wink. Come on, boy, walk!” He struggled to move

Dobbin forward, but the animal reared and the other horses backed away.

Kelven rode up and neared the anxious horse. “Luis, sir, I think I can help.” He dismounted Koby and commanded him with a mere nod, and his mount stood stock-still.

Kelven approached Dobbin and whispered words that Lia couldn’t make out. He placed one hand on

Dobbin’s muzzle and used his other to caress the sorrel-colored mane. Dobbin settled, finally stilled, and whinnied softly. Lia reveled in Kelven’s poise, her fears ebbing like a receding tide.

Kelven reached into his leather jerkin and brought out a carrot, feeding it to the calmed animal while he stroked his coat. “If you’ll allow me to lead as we go through this fog, we could pull him through to the other side. He’d feel better, I think, following another horse in.”

With his brow knitted, Granda Luis replied, “All right, but listen to me carefully; you must stay to the trail, keep your eyes to it at all times, as that’s the only way to ensure we don’t get lost in the mists. I’ll be stopping us mid-way to leave a few offerings.”

Well, that might explain the separate pack of ale and bread, Lia surmised. Then she shuddered to think about what sort of creature could subsist in the fog.

Ropes connected the small band, led by Kelven astride his horse Koby, with Wynn and his dapple-gray Nolan bringing up the rear. The procession eased into the mists, and the air turned frigid, like the breath of a cave.

Merrie’s ears twitched and she snorted. Light dimmed to mere shadows and Lia barely made out Dobbin’s tail swishing in front of her. She pulled her cloak tighter, leaving only her face exposed to the chill. The wall of fog enveloped them, with only the horse’s rhythmic hoof beats to break its eerie silence.

About the Author:
Christina Mercer writes fiction in addition to mothering two young adults, a pack of large dogs, and about 100,000 honeybees. She's been an avid reader since she could walk and took her first writing job at age 10 as reporter for her local 4-H group. Her varied interests and ambidextrous skills prompted her to study creative writing in college, earn her official degree in Accounting from California State University at Sacramento, become a CPA., acquire a certificate in Herbal Studies from Clayton College of Natural Health, and become a hobbyist beekeeper. She took Writer’s Best in Show at the 2012 SCBWI CA North/Central Regional Conference and was a semi-finalist in the2010 Amazon Breakout Novel Award Contest. You can find her at www.christinamercer.com or blogging with thegirls over at www.indie-visible.com