Review (47): Shatter Me by Tahereh Mafi

Shatter Me
by Tahereh Mafi 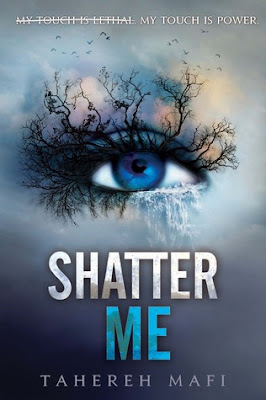 My Thoughts:
Any contact with Juliette’s skin causes instant pain which can lead to death and no one knows why. When her touch accidentally kills a toddler, she is locked up by The Reestablishment, a group who has come to power by convincing everyone that their way is the only way to fix things. With the world falling apart and thousands dying of disease and starvation, it is easy for the hopeless to believe. After 264 days of being locked in an asylum with absolutely no human contact, Juliette is finally let out--but what awaits her is worse than being in that concrete room. Warner, the son of the man in charge of The Reestablishment, wants to use her power as a weapon in the war he believes is coming, but Juliette wants nothing to do with his plan to turn her into a killing machine.

I love the concept of this and found it really refreshing. I don’t think I’ve ever read a book about people with powers that didn’t involve werewolves, vampires, etc (which I’m getting rather bored of). As for the plot, I felt like everything happened rather quickly--not necessarily in a bad way though. This is an action packed book that holds your attention from start to finish. I was blindsided quite a bit which is always great since I’ve become quite good at guessing what’s going to happen next.

My favorite thing about Shatter Me was definitely the characters. Juliette had a rough childhood and for 17 years was used to people being terrified of her and calling her a freak. It was great seeing her go from being withdrawn and insecure to confident and courageous. She almost becomes an entirely new person by the end; the kind and caring girl from the beginning is still there, just much stronger. Mafi depicts Juliette’s voice perfectly, especially at the beginning of the novel with all of the strikethrough when she feels the most alone and is trying to hide her emotions. The writing is truly amazing and like nothing I’ve read before.

Adam is caring, smart, and extremely mature for his age; he has had to deal with so much at such a young age. Their romance is really sweet and he is one of the biggest reasons for Juliette’s change. And then there’s Warner who is just in love with the idea of her. He is the definition of obsessed and it’s a bit frightening. But...is it bad that I kind of almost maybe liked Warner a little bit? I have no idea what it is about him...I kept having to remind myself that he was the bad guy. Last, but certainly not least, is Kenji. I feel like every book needs a Kenji, especially if it’s a book about running for your life. He is hilarious; even with a bullet in his leg he still manages to crack jokes. I can’t wait to see more of him in the sequel, Unravel Me.