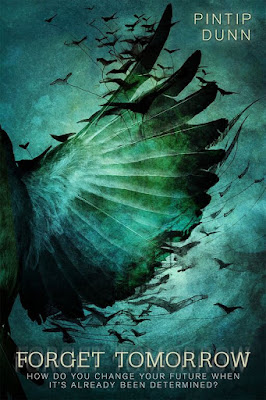 Imagine a world where your destiny has already been decided...by your future self.

It's Callie's seventeenth birthday and, like everyone else, she's eagerly awaiting her vision--a memory sent back in time to sculpt each citizen into the person they're meant to be. A world-class swimmer. A renowned scientist.

Or in Callie's case, a criminal.

In her vision, she sees herself murdering her gifted younger sister. Before she can process what it means, Callie is arrested and placed in Limbo--a prison for those destined to break the law. With the help of her childhood crush, Logan, a boy she hasn't spoken to in five years, she escapes the hellish prison.

But on the run from her future, as well as the government, Callie sets in motion a chain of events that she hopes will change her fate. If not, she must figure out how to protect her sister from the biggest threat of all--Callie, herself.

About the Author:
When my first-grade teacher asked me what I wanted to be when I author.” Although I have pursued other interests over the years, this dream has never wavered. I graduated from Harvard University, magna cum laude, with an A.B. in English Literature and Language. I received my J.D. at Yale Law School, where I was an editor of the YALE LAW JOURNAL. I published an article in the YALE LAW JOURNAL, entitled, “How Judges Overrule: Speech Act Theory and the Doctrine of Stare Decisis,” and received the Barry S. Kaplan Prize for best paper in Law and Literature. I am represented by literary agent Beth Miller of Writers House. I'm a 2012 Golden Heart® finalist and a 2014 double-finalist. I'm a member of Romance Writers of America, Washington Romance Writers, YARWA, and The Golden Network. I live with my husband and children in Maryland.