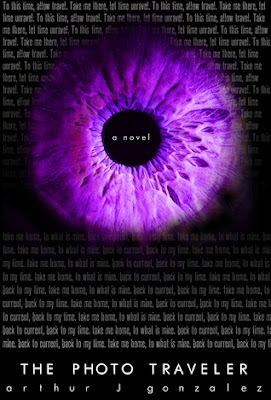 
Seventeen-year-old Gavin learns that he is one of the last descendents of a small group of Photo Travelers--people who can time travel through photos and images. But his initial excitement turns to fear, when he discovers that he and his grandparents are being pursued by the fierce remnants of a radical European Photo Traveler cult, the Peace Hunters. What Gavin has, they want!

Hi Arthur! Thank you for taking the time to answer some questions about your new book! First off, describe The Photo Traveler in 3 words for us?
Adventurous, Intriguing, Unpredictable.

What inspired you to write The Photo Traveler?
One of the most important people in my life life was facing a difficult time when their grandmother passed away. It affected him in such a deep way that it consequently affected me. I remember him crying, starting at an old black and white photo of his grandmother in Havana, Cuba. He held it, starting at it like she was talking back to him.
He said, "I'd give anything to travel into this picture right now and hug her."
I jumped off the couch my mind spinning in every direction. “What if you could?”

And from that moment…The Photo Traveler was born. It was perfect. It was as if she and my father plotted in the Heavens to gift me this story.

What is different about The Photo Traveler?
Okay…so let me be honest--we all know time travel has been done over and over again. But I wanted an idea that everyone would hear and think, “Oh my God.  I wish I could do that!” or “Hm…that sounds awesome.” And what better way than to time travel back and relive memories?

We live in a particular age where we document and photograph nearly everything we do. It’s a huge piece of this younger generation’s culture. I wanted to make sure whatever I did was relatable. There are no time travel machines, but there are millions of photos that anyone can pick up and travel to.

Are any of your characters based on yourself or someone you know?
Some are. The character Yogi is loosely based on one of my best friends. And besides the more intense, dramatic storylines to Gavin, I see a lot of me in him.

Have you always been interested in becoming a writer?
I’ve always loved writing. I began with writing poetry and music, but I progressed to imagining these stories I had to share. In some form or another, I have always wanted to be a writer.

What book are you currently reading? Do you prefer ebooks, paperbacks, or hardcover?
I just wrapped up the Beautiful Creatures series and I enjoyed it tremendously. As far as what why preference is--at first I was adamant on only reading physical copies of books, but I succumbed to my Kindle and we have never parted since. I love her very much.

What do you think is more important: character or plot?
There needs to be a balance of both in order to produce a success (like a marriage). Characters help propel the story forward, while the plot promotes and helps develop who the characters are. I don’t think you can have a truly epic story with both.

Do you have any advice for young writers?
First and foremost, there needs to be a relentless belief in yourself. Even if you are insecure or scared, you must believe that there is no other way for you. You cannot accept anything less than what you have dreamed of. Second, you need to be completely committed to your book and story. Take your time. Know your characters better than you know your very self. Also, connecting with your readers. Understanding what they want and how your stories can inspire them and generate emotional attachments. And lastly, do your research. Know what's available. Think outside the box for promoting your book. Never expect that success will be given to you. Work for it. Achieve it. Earn it.

What's next for you?
Hopefully somewhere in a Best Seller's category!  ;) But in the mean time I'll be writing the sequel to The Photo Traveler, called The Peace Hunter. It will be absolutely amazing. I'm also working on three other novels. I feel a little crazy. But I love it. All I have to say is: lots of coffee...lots and lots of coffee.

Once again, thank you for sitting down with us & good luck with your new novel!

About the Author:
The Photo Traveler is young adult author Arthur J. Gonzalez's first novel. Arthur was born and raised in Miami surrounded by his loud Cuban family. He graduated from the University of Florida, where he acquired his coffee obsession and his chocolate hoarding antics. He's the proud father of one baby girl, Sookie--his miniature schnoodle dog. Arthur is a self-professed goodball who spends 98% of his life laughing. He's now working on his second novel.