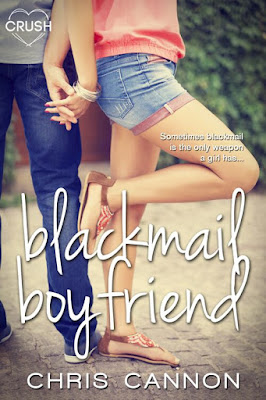 Sometimes, blackmail is the only weapon a girl has…

Bryce didn’t know the other Haley even had a boyfriend. He was just trying to get his ex off his back. And now doesn't know what's more unbelievable, not only is—that he's he being blackmailed,  or that he's being blackmailed by an honor student. His little “hook up” was supposed to end his problems with girls, not create new ones. Not only that, but his new “girlfriend” has two overprotective brothers, three-legged dogs, her father mows grass at the country club, and she's…well, difficult. And different.

Besides, everyone knows that perfect boys never fall for imperfect girls…Sometimes, giving in is all a boy can do…Can something so fake turn into something real?


Excerpt:(Scrollbox)
“We need to talk.” Bryce gave an exaggerated sigh.

“I’m sorry, but there’s someone else.”

He wanted to break up with me in the cafeteria? Fat chance. I leaned toward him and touched his arm in a girlfriend sort of way. “If you planned to stage a public breakup with me, you can forget it.”

Amusement showed in his hazel eyes. “Think you can stop me?”

“Yes. First, I’m going to appeal to your sense of decency. I’m not a hook-up kind of girl. Thanks to you, the entire school thinks I am.”

He snagged a chip and popped it in his mouth. “Do you even date?”

Ouch. It’s hard to have an active social life when you have two older brothers who chase everyone away, which is why I need you to stick around and stop that cycle.”

“Sucks to be you.” He stole another chip.

“If you don’t go along with Operation Boyfriend Bait, I’ll go with plan B.”

His brows came together. “Ratting me out to Denny?”

“After he pummels you into the ground, people will definitely believe you slept with his Haley and not me, so doesn’t it make more sense to play this my way? We both win.”

Jane came back and took her seat. “What did I miss?”

“He’s trying to break up with me. I gave him two options.”

“You or dismemberment by Denny?” she guessed.

“Exactly.” I crossed my arms over my chest. “What will it be?”

“I pretend to be your boyfriend for a week, and you keep your mouth shut.”

Bryce grabbed another chip. “One week and you can keep the Homecoming tickets.”

“Five weeks and you can have the Homecoming tickets back,” I countered.

“Two weeks,” he said. “And I don’t want the Homecoming tickets.”

“Four weeks.” He reached for another chip and I smacked his hand.

His mouth dropped open, and then he laughed. “That was not good girlfriend behavior.”

I pulled the bag of chips closer. “Landing me in detention was not good boyfriend behavior.”

He grinned all-knowingly. “You didn’t mind at the time.”

My face heated. “Whatever. I want four weeks, the Homecoming tickets, and a double date with Jane and Nathan.”

“Thank you.” Jane bounced in her chair.

“Thought I’d share the wealth.” I smiled at Bryce. “And this should go without saying, but I expect you to play my monogamous boyfriend. When this is over, we’ll do a mutual breakup with no one to blame.”

Chris Cannon lives in Southern Illinois with her husband and her three dogs, Pete the shih tzu who sleeps on her desk while she writes, Molly the ever-shedding yellow lab, and Tyson the sandwich-stealing German Shepherd Beagle. She believes coffee is the Elixir of Life. Most evenings after work, you can find her sucking down caffeine and writing fire-breathing paranormal adventures or snarky romantic comedies.