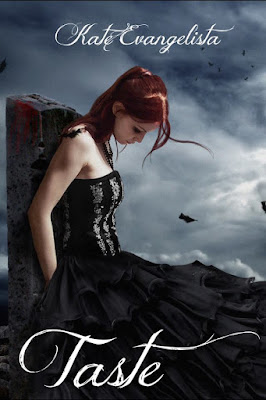 At Barinkoff Academy, there's only one rule: no students on campus after curfew. Phoenix McKay soon finds out why when she is left behind at sunset. A group calling themselves night students threaten to taste her flesh until she is saved by a mysterious, alluring boy. With his pale skin, dark eyes, and mesmerizing voice, Demitri is both irresistible and impenetrable. He warns her to stay away from his dangerous world of flesh eaters. Unfortunately, the gorgeous and playful Luka has other plans.

The group froze, startled by my words. The girls had their brows raised and the boys stopped mid-speech, mouths agape. They stared at me with eyes the shade of onyx stones.

I smiled and gave them a little wave.

The boy a step ahead of the rest recovered first. His stunning features went from shocked surprise to intense interest. He reminded me of a hawk eyeing its prey. I gulped.

“A Day Student,” he said, his eyes insolent and excited.

Something about the way he said “Day Student” made my stomach flip. “Excuse me?”

They snickered. The boys looked at each other while the girls continued to stare, muffling their laughter by delicate hands. I seemed to be the butt of some joke.

“You broke the rule.” The boy’s grin turned predatory.

The students formed a loose semi-circle in front of me. My gaze darted from face to face. Hunger filled their eyes. The image of lions about to chase down a gazelle came to mind. I mentally shook my head. I was in the mountains not the Serengeti for crying out loud.

I took a small step back and cleared my throat. “Can any of you give me a ride back to the dorms?”

The boy wagged his forefinger like a metronome. “Ah, that’s unfortunate for you.”

One of the girls pinched the bridge of her nose. “Eli, you can’t possibly—”

“It’s forbidden, Eli,” another boy interrupted, pronouncing the word “forbidden” like a curse.

The nervous murmur at the pit of my stomach grew louder. Six against one. Not good odds. Instinct told me to cut my losses and run. Bad enough I faced expulsion, now it seemed like weird, beautiful people who’d suddenly appeared on campus wanted to beat me up. No, scratch that. Judging from the way they studied me, beating me up wouldn’t satisfy them. Something more primal prowled behind their looks.

I definitely wasn’t going down without a fight. Years of self-defense and hand-to-hand combat classes had me prepared. While other children from rich and important families got bodyguards, I got defense training. But I think my father meant for my skills to go up against potential kidnappers, not against other students who may or may not be crazy. Oh God! Maybe I stepped into a parallel universe or something when I reentered Barinkoff.

“None of the students are supposed to be on campus,” I said. Then, realizing my mistake, I added, “Okay, I know I’m not supposed to be here either. If one of you gives me a ride back to the dorms, I won’t say anything about all this. Let’s pretend this never happened. I didn’t see you, you didn’t see me.”

He’d said “Night Students” like the words were capitalized. I didn’t know Barinkoff held classes at night. What was going on here?

Eli smiled with just one side of his mouth and said to the group, “She’s right, no one will have to know. We’re the only ones here. And it’s been so long, don’t you agree?”

The rest of them nodded reluctantly.

“What’s been so long?” I challenged. I fisted my hands, ready to put them up if any of them so much as twitched my way.

“Since the taste of real flesh passed through my lips,” Eli said. He came forward and took a whiff of me then laughed when I cringed.

Someone grabbed my shoulders from behind and yanked me back before I could wrap my mind around the meaning behind Eli’s words. In a blink, I found myself behind someone tall. Someone really tall. And quite broad. And very male.

I realized he wore the same clothes Eli and the other boys did. Not good. He was one of them. Although… I cocked my head, raking my gaze over him. He seemed born to wear the uniform, like he was the pattern everyone else was cut from. My eyes wandered to long, layered, blue-black hair tied at the nape by a silk ribbon. Even in dim light, his hair possessed a sheen akin to mercury.

I looked down. The boy’s long fingers were wrapped around my wrist like a cuff. His fevered touch felt hotter than human standards, hot enough to make me sweat like I was standing beside a radiator but not hot enough to burn.

“I must be mistaken, Eli,” the boy who held my arm said in a monotone. “Correct me. Did I hear you say you wanted to taste the flesh of this girl?”

A hush descended on us. It had the hairs at the back of my neck rising. How was it possible for the atmosphere to switch from threatening to dangerous? Unable to help myself, I peeked around the new guy’s bulk. Eli and his friends bowed. They all had their right hands on their chests.

“Demitri, I’m sure you misheard me,” Eli said.

So the guy standing between me and the person who said he’d wanted to taste me was named Demitri. I like the sound of his name. Demitri. So strong, yet rolls off the tongue. Definite yum factor.

“So, you imply I made a mistake?” Demitri demanded.

“No!” Eli lifted his gaze. “I did no such thing. I simply wanted to show the girl the consequences of breaking curfew.”

Demitri ignored my protest and continued to address Eli. “So, you threatened to taste her flesh.” His fingers tightened their grip around my wrist. “In the interest of investigating this matter further, I invoke the Silence.”

All six students gasped, passing surprised glances at one another.

Before I could ask about what was going on, Demitri yanked me down the hall toward the library. But why there? Oh, maybe we were getting my things. No, wait, he couldn’t have known about that. Everything was too confusing now.

Eli and the others didn’t try to stop us when we passed them. Demitri’s cold command must have carried power. Handsome and powerful, never a bad combination on a guy.

We reached the heavy double doors in seconds. He jerked one open effortlessly. I’d needed all my strength just to squeeze through that same door earlier. To him, the thick wood might as well have been cardboard. I raised an eyebrow and mentally listed the benefits of going to gym class.

“Why are we here?” I asked after my curiosity overpowered my worry. I’d almost forgotten how frightened I’d been right before Demitri showed up. I wasn’t above accepting help from strangers. Especially from gorgeous dark-haired strangers with hot hands and wide shoulders.

Demitri kept going, tugging me along, snaking his way deeper into the library. I had to take two steps for every stride his legs made. I tried to stay directly behind him, praying we didn’t slam into anything.

He stopped suddenly and I collided with him. It felt like slamming into a wall.

“Hey,” I said, momentarily stunned. “A little warning would be nice!”

He faced me, and I gasped. His eyes resembled a starless night, deep and endless. Their intensity drilled through me without pity, seeming to expose all my secrets. I felt naked and flustered beneath his gaze.

“You could have died back there,” he warned. 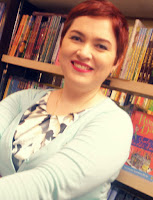 When Kate Evangelista was told she had a knack for writing stories, she did the next best thing: entered medical school. After realizing she wasn't going to be the next Doogie Howser, M.D., Kate wandered into the Literature department of her university and never looked back. Today, she is in possession of a piece of paper that says to the world she owns a Literature degree. To make matters worse, she took Master's courses in creative writing. In the end, she realized to be a writer, none of what she had mattered. What really mattered? Writing. Plain and simple, honest to God, sitting in front of her computer, writing. Today, she has four completed Young Adult novels.