Hi Andrea! Thank you for taking the time to answer some questions about your new book! So first off, describe The Fairytale Keeper: Avenging the Queen in 3 words.
Fairytale Maiden Fights Corruption.
Okay, I know that’s four, but oh well.

Where did the idea for the Fairytale Keeper series come from?

The idea came to me six years ago while I was getting my undergraduate degree in education. I was listening to a lecture about the commonalities of fairy tales.  The professor said that nearly all cultures have a Cinderella story. This made me wonder if one person, living thousands of years ago, could have been the real Cinderella. Could it be possible that this one girl spawned all the different versions of the story? I love Grimm’s fairytales and so I twisted my unlikely hypothesis (that the Cinderella tale originated from one girl) into the presumption that one girl could have been the origin of Grimm’s most famous fairy tales.

What was your favorite scene to write?
I like writing dialogue, action, romance, and dreams equally. I don’t really have one scene that I liked writing more than any other.

What are your thoughts on the cover? Did you have any input in the design?
Actually, I made the cover. I wanted it to have a misty, dark feel to it to match the tone of the novel. I also knew the colors black, white, and red were going to be very important since Snow White is described as having skin as white as snow, lips as red as blood, and hair as black as a window sill.

Are you working on anything new at the moment? If so, can you tell us anything about it?
I’m working on a new beginning for the second book. The characters just started having this conversation in my head and I knew I had to change it. I think readers will like the new beginning. It’s faster. It ropes the reader in and plays on some of the drama at the end of the first book.

Do you have any advice for young writers?
Are you excited about any new books being released soon?
I keep seeing a book called Cinder everywhere. It looks like a futuristic Cinderella retelling. I think I’m going to have to check that one out. I haven’t read a single post-apocolyptic young adult novel and I love the subject. So if anyone has any suggestions, I am open to them. 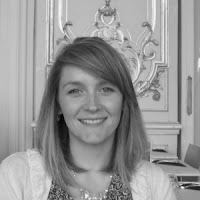