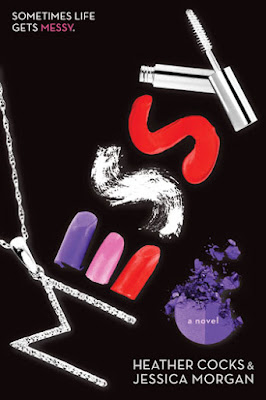 My Review:
This is more of a companion than a sequel to Spoiled and does not focus on Molly. Instead her best friend, Max, gets most of the spotlight along with her half-sister, Brooke. The two join forces (a bit reluctantly) to create a blog that will launch Brooke’s acting career. Max, who is basically the brains behind the blog, is hired to pose as Brooke and secretly write all of the blog entries. It was a cute, fun read but it also had some depth to it. It really highlights how important it is to children to have parental approval and attention and shows how far Brooke is willing to go to attain both. Despite taking it a little too far, her plan pays off in the end.

I felt that both girls were very real and relatable. I loved how sarcastic Max was. And despite all her snarky comments, it was obvious by the end how much she actually did care about Brooke. As for Brooke, she once again spends most of the book trying to find ways to get the attention of her self-absorbed movie star father. And although I liked Molly from the first book, I really liked that she wasn’t the main focus of this one. It was a different perspective and a nice change.

The cover of my ARC is completely different than the one on Goodreads. I have no idea which is the final, but I have to say that I prefer the ARC version better which is why I chose to include it in this post. I like how each letter is a different make-up item instead of all of them being different items of clothing.

I definitely enjoyed this one more than the first book. And, once again, fans of The Clique and The A-List will definitely enjoy it as well because it has elements of the two and is sort of in between both.

Click here to read the first 3 chapters!
Posted by Unknown at 12:01 AM