Review (66): The Wrong Side of Right by Jenn Marie Thorne

The Wrong Side of Right
by Jenn Marie Thorne 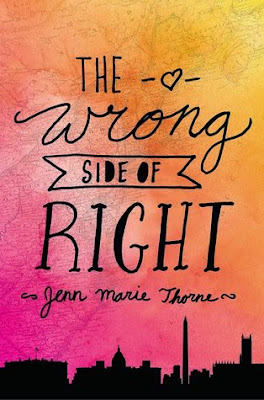 My Thoughts:
Imagine being told, after 16 years of total ignorance, that your father is the man currently running for the United States presidency. That is exactly what happens to Kate Quinn after her mother tragically passes away in a car crash. She is thrust into the public eye when she joins Senator Cooper—and the rest of her newly discovered family—for the summer as they get to know each other and campaign around the United States. Along the way, she befriends the presidents son. He understands exactly what she is currently going through and so he becomes one of the few people she can confide in. But when both your fathers are running for the most powerful position in the world, things can get a little tricky.

This was cute, yet emotional; it really focuses on love and family and what those two things really mean. Kate struggles to get to know her father because he is somewhat distant and is constantly off trying to rack up votes. As she learns more about him and tries to understand his conflicting views, their relationship becomes strained. It takes a lot of tears and talks for them to find common ground.

Meg, Kate’s stepmother, is strong, supportive, and kind. I respect her so much for the way she handles taking in, and loving, her husbands daughter. I’ve known people in the same situation as Kate who are not always as welcomed. (I’m glad that this is not the case because it is heartbreaking to see these children get the backlash for something they have no control over.) The twins are adorable—Gabe in particular. He is the complete opposite of his sister Gracie—timid & reserved—yet he warms up to Kate a lot quicker.

There are slow parts that I found myself trying to rush through because they were frequent and all pretty much the same. A majority of the chapters seem to be of Kate stuck at home worrying about the campaign and about how she isn’t the perfect daughter. And while she travels around the country with the senator and the rest of the family to promote the campaign, we only get glimpses into these events before she is whisked back home again. I wish there had been more scenes with Andy; their first “date” was adorable and more of that would have been welcome. I feel like some of these filler chapters could have been left out altogether or substituted for some that brought more to the overall story.