Review (68): Written in the Stars by Aisha Saeed

Written in the Stars
by Aisha Saeed 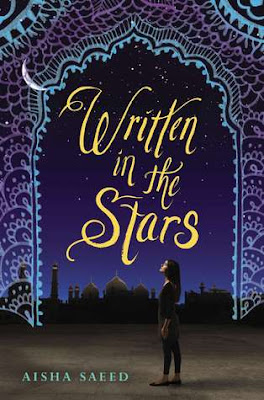 My Thoughts:
Naila is the daughter of Pakistani immigrants. She has spent the last seventeen years living a normal American life. Despite their traditions and beliefs, her parents have always allowed her to dress how she pleases, study what she wants, and even go to the college of her choice. The only thing they forbid her to do is chose who she will marry. When they catch her at prom with her boyfriend they are enraged and very disappointed because Saif, although also Pakistani-America, does not come from a “respectable” family. Naila’s parents feel that they have failed her and that the only thing to do now is to spend a month in their homeland so Naila can understand where she comes from and why this is so important to them.

Her parents use their time in Pakistan to scout for an honorable boy for her to marry. It’s obvious from the beginning what her parents are trying to do and I think deep down Naila knew but she didn’t want to even imagine that option. Everyone tells her that her fate has been sealed, that her destiny has been written in the stars, and that fighting will only make things worse for her. But she refuses to give up on the life her parents are stealing from her. She fights, runs away, and downright refuses but instead of listening to her, they drug her so she complies. I admire her resilience and bravery. She fought and continued to fight despite knowing that doing so could get her killed. I also admired the fact that she didn’t let this break her. She resigned herself to her new life, yes, but she did so on her own terms once she realized that this was a better option than being empty inside for the rest of her life.

At first I was a little apprehensive about the writing style because it was so simple, but I think that is what made it possible for Naila’s emotions to be so well understood and felt. The reader is able to focus on what is happening without being distracted trying to figure out what the author means.

This was a little hard to read because of the subject matter. It is heartbreaking to know that there are so many young girls (even in 2015) that are forced to endure what Naila goes through, some with fates ten times worse than hers. I can’t even imagine what it must be like to feel that helpless and hopeless. I have never really understood arranged marriages as I do not come from a culture that practices them, but reading this showed me that an arranged marriage is most definitely not the same thing as a forced marriage. This is a fantastic book that brings awareness to this issue. Definitely read the Author’s Note at the end of the book and Saeed’s guest post over at YA Highway for an even better understanding of the different types of arranged marriages.