Review (67): Everything That Makes You by Moriah McStay

Everything That Makes You
by Moriah McStay 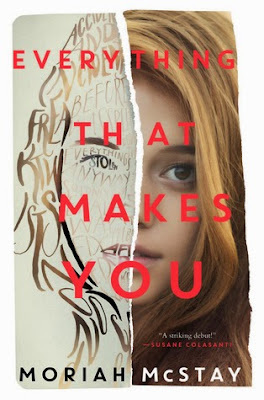 My Thoughts:
Fiona/Fi are the exact same person living completely different lives because of a decision made when she was just five years old on that fateful trip to the zoo; whether to get a bag of popcorn or visit the panda exhibit. One lead to a tragic accident that, twelve years later, she is still trying to come to terms with. The other left her with little more than a stuffed panda and some great memories. But despite being on separate paths, their two lives are connected and intersect in odd and amazing ways.

Sometimes when making decisions I wonder what could have happened if I had taken the other option; choosing one class over another, leaving earlier to not miss the bus, etc. Sometimes even just one second of delay can end up saving someones life… I thought this was a great concept and an interesting book to read. I’m a believer in fate and this definitely has a lot of it interwoven in the plot.

Despite the two girls being in alternate universes, there are some similarities and coincidences that prove that even though their two lives could not be more different, they are still meant to end up where they do and to meet the important people in their lives that influence them. McStay does a great job of connecting all the characters and their stories in both versions of Fiona’s life. A lot of relationships stay constant between both, but others are completely different from one version to the other, yet they work very naturally and are easy to believe and follow along with.

Initially you think that Fi’s life—the version where she is not badly burned and scarred—is the perfect one, but she isn’t happy either and suffers quite a bit as well. She becomes lost after losing both of the things she loves the most and spends a whole year trying to get out of this funk and get her life back on track. Fiona—who has had to deal with angry scars covering the entire right side of her face basically her entire life—is actually the one I found more inspiring. She is very self-conscious, as I image anyone would be in her situation, and unfortunately she lets this stop her from doing what she truly loves. Eventually she realizes that everything happens for a reason and what you do with your situation is what ultimately defines who you are, so why worry about something you have no control over?