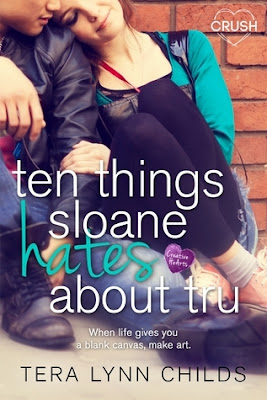 After getting herself into quite a bit of trouble, Sloane’s parents decide she needs a change of scenery and to distance herself from the bad influences in her life--i.e. all of her New York City friends. The plan they come up with involves Sloane and her mom moving to Texas for the year while her brother and father stay behind in the Big Apple. To say she’s less than thrilled is an understatement, but she’s prepared to be on her best behavior if it means getting herself home early. The problem is that the troublemaker next door won’t seem to leave her alone. She promised her mom she’d stay away, but there’s just something about Tru that makes her almost forget how much she hates Texas.

This was a quick, cute read. I really liked both Sloane and Tru. Sloane is outspoken and witty. She seems to be the black sheep of the family--the others don't completely understand her artistic side. I thought it was super cool that she had a secret online comic strip and was sort of jealous at the same time because I've always wanted that kind of artistic ability.

Tru also has his fair share of family drama--more so than Sloane is some ways. But despite all that, he is very charming and was just a very likable goofball. I can definitely see why it was so hard for Sloane to resist him, and am glad that she didn't let other peoples prejudices about him decide their friendship.


I did think that the conflict in the plot was a little juvenile and unrealistic (I know this probably sounds vague until you actually read what happens, but obviously I'm not going to spoil it). I just honestly doubt something like this would happen in real life without someone taking notice early on. But overall I did enjoy the book and am glad it is part of a series; I'm excited to see what happens next with these two because they were both such great characters!