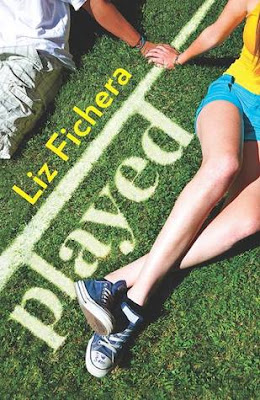 An unlikely friendship blossoms between Sam Tracy and Riley Berenger when Riley accidentally slips off the side of a mountain and Sam goes after her. The duo spend the night in a rainstorm, wrapped in each others arms to fend off the cold. Sure they are close to death, the two share their deepest, darkest secrets and, once rescued, Riley vows to help Sam win over the love of his life. Sam wants little to do with Riley and her persistent attention; he prefers to spend his time with his friends from the Rez and away from the rich suburban princess and her obnoxious older brother, Ryan. However, Riley has no intention of backing off until she has repaid Sam for saving her life.

This was a cute follow up to Hooked--the first book in the series and the story of how Riley's older brother Ryan fell in love with a girl named Fred. I really enjoyed Hooked and therefore was excited about this one as well. However, I read it such a long time ago that I couldn't remember either Riley or Sam's part in the first story. It was great getting to know them again while also having the characters from the first book make an appearance.

I thought the dynamic between Riley and Sam was pretty funny. Sam is so surly and standoffish, yet it does not seem to faze Riley (who he refers to as Pink Girl a few times) one bit. She literally follows him home one day after school so she can check out his wardrobe and make sure he has the appropriate attire to attract the girl of his dreams. Despite all his protests, he can’t seem to tell her no and goes along with all her crazy schemes. They could not be more different but it works completely.  Both were pretty oblivious about their feelings toward one another and it was a little frustrating how long it took them to finally admit that they actually liked one another.

My favorite part about this series though is the diversity of the characters. Both Fred (from Hooked) and Sam are Native Americans who live on the nearby reservation. We actually get an in-depth look into what life on the Rez is like and I honestly don’t think I’ve ever read another YA book with characters that have this type of background. Representation is so important and I’m glad to see YA books that don’t shy away from that.