Rules of Seduction
by Jenna Mullins 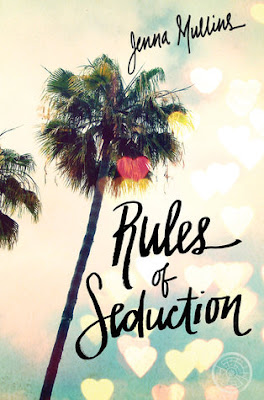 My Thoughts:
Dani Young has just graduated college and is ready to start her screenwriting/directing career in Los Angeles. Her very first day in the City of Angels doesn't go as planned, but she reunites with her childhood best friend, Elise, who snags Dani a job on the set of Vamp Camp--a popular teen show where Elise's boyfriend (Tate Lawrence) just happens to be the star. Burned from a past relationship, Elise asks Dani to seduce Tate because she wants to be sure that he's a loyal boyfriend even when she's not around. Dani sees no harm in helping a friend out seeing as she has no intention of ever falling for a shallow and egotistical celebrity. However, Tate surprises her and she has no idea how to derail their growing friendship.

This is written as a flashback--the main character, Dani, is getting her hair and makeup done and begins telling the story of how disastrous her first few months in LA turned out. We don't find out what she's getting ready for or who exactly she's talking to until the very end when everything is wrapped up. I thought this was a unique spin that added depth to the story.

Overall though, I wasn't impressed. I felt like the dialogue was unrealistic and I didn't particularly like any of the characters except maybe Tate (who was a sweet, animal lover) and Dani's roommate, Brit (who was the most eccentric of the bunch and who was Dani’s only true friend in my opinion). Dani was a bit too snobbish for my taste and Elise was self-absorbed and annoyed me to no end. I thought that the drama between her and Dani ended a little too perfectly and conveniently to be believable. I also didn’t think that Dani and Tate had the best chemistry, but I did enjoy watching their friendship grow.

Even though this wasn’t one of my favorites, it is a quick, fun read and I think it might still be worth picking up if you like lighthearted new adult romances.