Guest Post: What makes an amazing hero? by Chris Malburg 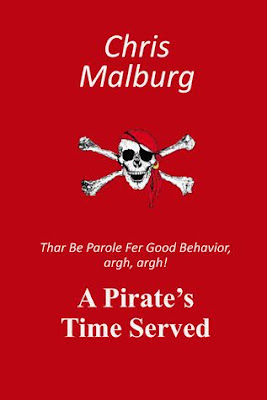 Careful what you wish for...

Sarah Schilling’s twelve year-old brother is wicked smart. But this? Pure genius. Brian snagged an invitation to spend the summer with their favorite aunt and uncle on St. Croix. Uncle Jack tells them, “There will probably be some swimming, some diving. We like to run. There’s a range, so maybe you’ll learn to shoot. Cooking. Your Aunt Helen is a classically trained chef. You knew that, right? There’s the Mallard seaplane, so maybe you’ll learn something about flying. That sort of thing.”

That sort of thing sounds like too much work for Sarah Schilling’s summer on the beach. Until Brian’s scuba regulator mysteriously fails sixty feet underwater. Her training snaps into laser focus. During Brian’s rescue they unearth the 250 year-old secret of Black Bart—the pirate and his ghost. The discovery launches them into a hurricane of peril at the hands of modern-day pirates. The Schilling family will not survive unless Brian and Sarah discover the most powerful weapon that is within themselves.

A Pirate’s Time Served is a YA thriller of a ghost story. It shows how two teens can dig deeper than they thought possible, discovering what it means to lead, to follow, and to never ever give up—especially on family.

What makes an amazing hero?
by Chris Malburg

There are a number of ingredients that I strive for when creating the heroes used
in my books. First, the person must have a solid moral compass. Readers need to
trust the hero—even a flawed one—to do the right thing. However, in the
action/adventure genre, the hero cannot be too good. They’re going up against
some pretty unsavory types. So they are often somewhat flawed. This allows for a
certain redemption—authors call it an epiphany. We want to see the hero grow
and change in some significant way.

In A Pirate’s Time Served Brian and Sarah Schilling are two teens who turn into
amazing heroes. My readers have developed a relationship with their uncle, Jack
Schilling, over the first two books in the Enforcement Division series—Deadly
Acceleration and God’s Banker. Like Uncle Jack, Brian and Sarah are consistent
throughout and true to the values of justice and faith in themselves and their
teammates. These are core values on which readers can always count.

I chose Jack Schilling as the two teen’s primary coach because he’s
extraordinarily competent, from the training of his early days as a Navy SEAL
and later in the SEC’s Enforcement Division. Jack carries none of the swagger
and self-righteousness that some authors give their lead characters, making them
something of a walking cliché. Instead he is humble and focused on his people
and his objective. These are the qualities he and Helen Schilling teach Brian and
Sarah. In my interviews with those having such a background in real life, every
one of them has such qualities. I have had the privilege of spending time with men
having Schilling’s background—they are the best of the best. Knowing them is
quite an experience. Jackson Schilling is modeled after these extraordinary
individuals.

There’s a converse to what makes a great hero. That’s what makes a great villain.
After all heroes need villains to go up against. Great villains are tough for me to
create. I have no frame of reference for people who would do such awful things as
shown in A Pirate’s Time. But I’m a fast learner. What helps me most is to think
of how I would react in that situation, then do exactly the opposite and ramp it up
to inflict the most pain and misery.

Some characters start out as villains and have an epiphany. By story end they are
every bit as loved as those characters who maintain their hero status wire to wire.
Black Bart is just such a character. He begins the story as the villainous ghost of
the most notorious pirate who ever was. But he changes—partly due to Brian and
Sarah.

I crafted Bart so that readers can see inside him to his point of view and how he
rationalizes his past. To me, this is the key to creating both great heroes and
villains. Readers need to see inside the person. Their behavior must be consistent
with the person they are portrayed to be. Their actions must logically follow from
this construction of the person. Anything other than this confuses everyone and
creates a less believable character.

When done right heroes and villains alike become unforgettable characters.
They’re strong enough to appear in book after book and to carry a series—as
Jackson Schilling has done for three books with a fourth now in production.

Chris Malburg is a widely published author, with work spread over 11 popular business books--including How to Fire Your Boss (Berkley) and Surviving the Bond Bear Market (Wiley, March 2011).  In his other life, Chris is a CPA/MBA, a former investment banker and now the CEO of Writers Resource Group, Inc., providers of professional financial literary content to corporations (www.WritersResourceGroup.com).  That’s the professional side of Chris’ career.  The fun side began when UCLA’s Writers’ school taught him to transition from biz-speak to fiction. GOD’S BANKER and the first installment in the Enforcement Division series, DEADLY ACCELERATION, both combine Chris’ natural talent for story telling with his professional command of the high-stakes investment world and what money and power do to some people.

GOD’S BANKER  came to fruition from Chris’ hospital bed while recuperating from an athletic injury.  As a long-time endurance athlete, Chris is no stranger to the surgeon’scalpal.  Over 130,000 words later, GOD’S BANKERwas complete.  “It just poured out me,” says the author.  “I carried my note pad to physical therapy; made plot notes during the hours in the gym doing rehab; even while on my long bicycle rides through the hills overlooking the Pacific Ocean where we live.  Slowly endurance returned and with it, GOD’S BANKER.”

Chris Malburg lives in Los Angeles with his wife, Marilyn.  Their hobby is raising service dogs for Guide Dogs for the Blind.  As of this writing, they have raised eight Labrador retrievers and have had three make the cut for placement with their disabled partners.