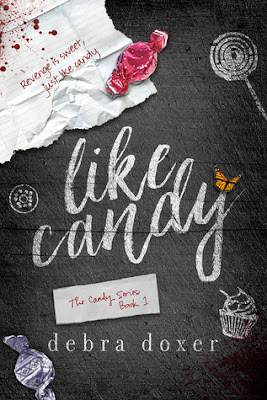 My Thoughts:
Candy Seaborne is pretty sure her father is a spy—or maybe even an assassin. Either way, he’s a total badass and she wants to follow in his footsteps. But for now she’s a senior who’s trying to reestablish her place in the high school hierarchy. She is instantly drawn to Jonah Bryson who seems to be full of contradictions. He’s a jock, but not your typical player. He’s popular, but kind of antisocial. And despite the fact that they just met, he seems to understand her better than anyone.

This is told over two full-length books; Like Candy and Sweet Liar. The beginning was kind of slow as we are introduced to the characters and it mainly focuses on Candy’s growing relationship with Jonah. I love it when the author actually takes the time to build the romantic relationships in their book; it is always enjoyable and much more believable seeing a relationship bloom slowly rather than having the characters get together after just 5 pages or whatever.

It wasn’t until almost the very end that the action picked up and the interesting stuff started to happen (which was a little frustrating because I had no clue where the plot was going most of the time since there wasn’t much happening in the first 3/4 of the book). I still have no idea what Candy’s father does for a living or what he did to piss off his superiors, but it is something that is spilling into his personal life quickly—and, shockingly, into Candy’s as well. I won’t say how, but I will say that it was a well-developed plot twist that I did not see coming! The story also ends in a pretty massive cliff-hanger that leaves you wishing this was not split into two books because you need to know exactly what happens after the last word.

I didn’t particularly love Candy at the start, but she definitely grew on me as the story progressed. I feel like as Jonah got to know her better, so did I. She is manipulative and thrives off of revenge, but is also really sweet and kind of a homebody; she would rather spend her nights at home cooking dinner for her father instead of being out all night with her friends. Jonah was also really sweet and caring. He does some of the nicest things for Candy, but at the same time is very secretive which made it hard to really get to know him; I’m hoping we get to learn more about who he really is in book two.

I would probably have given this a full 5 stars had it not been for the lull in the plot at times. I appreciate that the time was taken to really develop the characters and their relationships with each other, but it would have also been nice if a bit more action was thrown in earlier. But other than that, I really did enjoy this and will definitely be picking up Sweet Liar and any other books written by Doxer in the future.