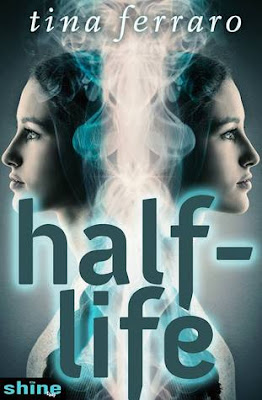 My Thoughts:
Trisha and her friends have a Halloween tradition wherein, at the strike of midnight, they hold compact mirrors up to the flame of a candle in the hopes of seeing the faces of their future husbands. Year after year, the only face staring back at them is their own. This year something incredulous happens; the face Trisha sees in the mirror is identical to her own, but it does not belong to herself. She sees Chessie, her twin sister who passed away when the girls were just 5 years old. In nightly meetings that only she can see and hear, Chessie claims to be back on a mission that involves Trisha. Trisha is pretty sure she’s gone crazy, but chooses to follow the instructions her sister has outlined for her in the hopes that it will help Chessie finally move on and gain the peace she deserves.

The official synopsis for this book is very misleading and alludes to a much more sinister plot (especially in the last paragraph) than is actually present. I thought this was going to be a lot spookier and more supernatural, but all that really happens between Trisha and her long-deceased sister is that they get together and talk about Chessie’s plan every other night or so. (Unfortunately, she isn’t even a cool ghost with powers because she can’t manipulate anyone or anything) Chessie supposedly has a way to get Trisha and her ex-best friend to patch things up, but in order for this to happen, Trisha apparently needs to start dating a classmate of her choice. The whole plan was really random and didn’t make much sense--it didn’t add up with the ending in my opinion. I just felt that the whole central plot was off and lacked believability.

There was not much of a romance aspect either; Trisha lacked chemistry with both of her romantic interests which was disappointing. She has a huge crush on a fellow student, Kirk Maxwell, but the boy she chooses to help her fulfill Chessie’s task is someone completely different and someone she hardly even knows. As expected their relationship went nowhere. Kirk kind of just shows up at random times and “saves” her from situations. He seemed to be into her, but they don’t ever really share any special moments.

My favorite aspects of this were the overall message of friendship, honesty, and the familial bond and the fact that it is barely over 100 pages long. Other than that, I feel like this was a cool concept, but was just trying too hard to be something it unfortunately wasn’t.