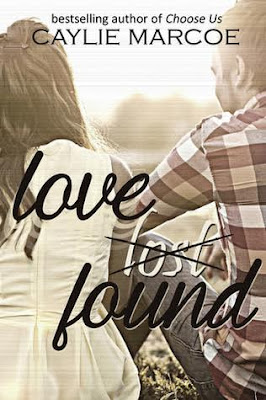 Shattered into a million pieces, and that’s just how she’d like it to stay.

She doesn’t believe she deserves happiness. She doesn’t understand how to move on while her life is falling apart and her reality is destroyed.

Eli is someone Haley thought she knew, but who turned out to be so much more than she remembered. He sees through her pain and refuses to be pushed away, even when she lashes out.

Eli’s patience is both frustrating and surprising. Haley was so sure she wanted to go on feeling nothing, but Eli stirs emotions she can’t deny.

Will Haley allow Eli to help her through this horrific time so she can find herself again? Or will she lose the only person who can help heal her heart?

Hi Caylie! Thank you for taking the time to talk with us!

How'd you come up with the story for Love Found?
I always knew I wanted to write a more emotional story. One where the female lead was dealing with a major family issue, but also attending college, hanging with friends, and falling in love. There wasn’t a specific moment where this story idea came to me, I think it’s just always been sitting in the back of my brain waiting for the right moment to be written.

Did you use any real life experiences in this book?
While it’s not an autobiographical story, there are some experiences from my life that I pulled on. For instance, my mom also passed away from cancer, and I was told months before she passed that she was dying and there was nothing we could do. The whole mother/daughter relationship was, I think, what I would have wanted to happen had I been older when she passed.

Also, there are a few scenes that may have happened with my friends in college….I won’t divulge them all, but here are two that stick out to me.

While the Kyler chair scene seems completely random, my real-life Kyler also called me in a semi-panic to help her build her chair, and it’s seriously one of the moments where I think, “Yep, this girl is going to be one of my best friends.”

I also played Jeopardy with my guy friends before…the Saint Bridget thing still makes me mad to this day.

Why did you decide to change the title?
Parting Chances was originally a working title. But I think in the end, it just stuck, because I couldn’t come up with anything else that worked. And the more I tried to explain to myself that it would work and that it made sense, the more I felt that I could roll with it.
The issue, however, was that I don’t think anyone else understood the title, unless it was explained to them. And I felt maybe that was why people were choosing not to read the book. They would see the title and go, “This makes no sense,” and click past it.

With Love Found it makes so much more sense, without any explanation needed.

What made you realize you wanted to be an author?
For as long as I can remember, I used to make stories up in my head. When my parents first got a computer, I sat down one day and started writing an ‘Nsync fan fiction (yes, I was that girl). And one chapter turned into two…and the next thing I knew, I had thirty two chapters and a legit full length novel.

And it was fun writing.

Fast forward to 2013, and I was a stay-at-home-mom to two tiny humans, and I read…a lot. And one day I thought, “Hey, I could have written this story.” So I sat down at my computer, thought about this recurring dream I’ve had, and wrote out a chapter. I sent the chapter to a friend to see what she thought, and she told me she wanted more. That was my awakening, if you will. It was the moment where I thought, “I could write these stories in my head, and people might actually enjoy them.”

Are you a plotter or a pantser? Explain...
I’m a total pantser. I wrote Choose Us based on a recurring dream, and that was really only a very few scenes. The rest I just…wrote.

With Love Found I just started writing and it led itself. However, I did get stuck towards the end and needed to plot some of the story, but for the most part, it was off the top of my head.

I have plotted a few stories because, as of recent, I’ve been having a hard time writing anything. I thought maybe plotting would be a good idea and would help me write something. But….even that hasn’t worked out well.

Do you have any music that helps you write?
It depends on the story. For Choose Us it was a lot of pop-punk music, because of who Travis is. Love Found was a lot of instrumental piano music, because I needed to be focused and write some pretty difficult scenes. I have a story where country music helps me write. Or a Christmas story where…Christmas music works best.

Again, it really just depends on the story. And I am an eclectic listener; I love most everything.

What's your favorite genre to read?
I would have to say contemporary romance. I love me some romance. But I do love paranormal, dystopian, fantasy, sci-fi (sometimes)…but they all need a little romance.

What can we expect from you next?
This year has been tough for me with writing. I can’t pinpoint why, but every story I start, I only make it about five thousand words in before I bail.

With that being said, I do have a story I’m working on about long lost love.
And then there is Nicki’s story…for those of you who have read Choose Us. It’s still being written, albeit slower than expected.

Fave book?
Oy vey. Um…I could give you a favorite book…from every author…I’ve even read. But to answer this one, I’m going to say the book(s) that I can keep going back to time and time again and never get bored. And that is the Harry Potter series. (One book…seven books…what’s the difference?)

Fave holiday?
Thanksgiving! Delicious food. The time we decorate for Christmas. The only holiday we celebrate with just our family of four. And football…oh boy, football. CoughGoPackersCough!!

If you were stranded on a desert island, what book would you bring?
A survival guide, because I am worthless in the wilderness (or desert island, in this case).

Fave song?
Right now, it’s “Fight Song” by Rachel Platten. Of all time? Probably “Watch the Sky” by Something Corporate.

Born and raised in the frozen tundra of Wisconsin, Caylie fell in love with reading at a young age. With her lively imagination, she created numerous stories in her head throughout her childhood and teenage years.

Her first novel, Choose Us, released in April 2014 and became an Amazon Bestseller.

When she isn't slaving away at the keyboard, Caylie is an avid reader, and lover of coffee... copious amounts of coffee. She also has an unhealthy addiction to coffee mugs, chapstick, water bottles, football, and tv shows--binge watching is her favorite.

She chases her two kids around the house all day, and has a husband whom she adores.

If you want to stay tuned in to all of the new release news, sign up for Caylie's spam-free newsletter HERE. It only comes out when something exciting is happening...promise!