Review (70): One Night That Changes Everything by Lauren Barnholdt

One Night That Changes Everything
by Lauren Barnholdt 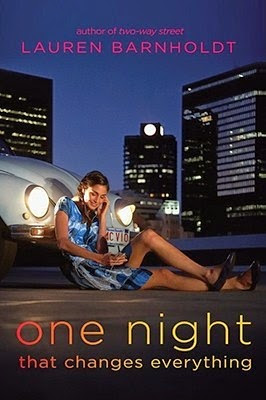 My Thoughts:
When her father gets offered a job in a brand new city, Eliza’s twelve year old self decides this will be the perfect opportunity to reinvent herself. With her allowance, she buys a purple notebook and begins making a sort-of bucket list of all the things she wants to do but has always been afraid of. Except the move never happens. Now 5 years older, the list has grown and includes much more personal items—things she doesn’t want anyone to read because some aren’t just about herself. And so, when it is stolen by the 318s (a secret society made up of the popular boys of her high school, including her ex-boyfriend Cooper), she has no choice but to do what they say or they’ve threatened to post her notebook online for everyone to see. Except this isn’t going to be easy because the tasks they’ve chosen for her are the things she wrote…all the things she’s never had the guts to do.

This was a very quick read (I’m sure I would have finished in a day had I not had a paper to write the same weekend I started this) that sucked me in from the beginning. It takes place in the span of just one night, but oh so much happens in those 12 short hours. The 318s basically have Eliza and her two best friends, Marissa and Clarice, on a wild goose chase all over Boston and the surrounding cities. She is forced to do 4 tasks throughout the night that she does, in my opinion, like a champ. They honestly weren’t that bad—except for one—but I can understand why she would have added them to her notebook of things she’s not brave enough to do.

Eliza is sarcastic, spunky, and, at times, kind of crabby. I wanted to tell her to just shut up and listen to what people—particularly Cooper—were trying to tell her, but she definitely had me laughing out loud because of some of her comebacks. She has no choice but to do what the 318s tell her to, but she does most of the tasks defiantly and only as a way to buy her time so she can come up with a better way to get her notebook back. I think Clarice and Marissa are great secondary characters. They balance each other out because they are polar opposites—although both are pretty naive when it comes to aspects of love. Despite the length of the storyline and how fast everything seems to happen, it is obvious that all three of them takeaway something positive from what they experience that night.

This is a story of friendship, second chances, and conquering your fears—even if you are literally blackmailed into doing so. I’ve read a few of Barnholdt’s books and have enjoyed all of them so far. I highly recommend this as a fun and quick read!