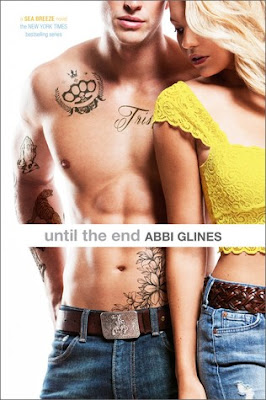 Until the End
by Abbi Glines

The backstory that fans have been clamoring for—how Rock and Trisha fell in love—is the final novel in the Sea Breeze series from New York Times and USA TODAY bestselling author Abbi Glines.

Trisha Corbin always knew how to hide a bruise. With her momma’s boyfriends unable to keep their hands off her, she had no choice. And as long as it meant the guys wouldn’t go near her little brother, Krit, it was worth it. But her days of dreaming that Prince Charming would ever come rescue her are far, far in the past.

Rock Taylor always had a plan. Through football, he would rise above the life he was born into. A full scholarship to play for a major college team was within his reach—assuming he didn’t let anything get in his way. But scoring a date with the hottest girl in Sea Breeze was proving harder than expected. Trisha Corbin was every man’s walking fantasy, and she wouldn’t even glance his way.

When Rock finally does get Trisha in his truck, it isn’t for a date. It’s because he picks her up on the side of the road, beaten and bruised and trying to get to the local hospital. Before Rock knows it, football is no longer his life. Trisha Corbin is. And he’ll do anything to save her. And keep her.

In addition to Rock and Trisha’s love story, this special conclusion to the Sea Breeze series contains the wrap-up stories of all your favorite Sea Breeze couples: Sadie and Jax, Marcus and Low, Cage and Eva, Preston and Amanda, Jess and Jason, Krit and Blythe, and Dewayne and Sienna. The steamy romance doesn’t stop until the very last page!


I'm pretty sure this actually came out last year (I think?), but I saw it on the coming soon section of B&N.com and I absolutely love this series but haven't had a chance to finish it so I thought I'd include this in a WoW.
Posted by Unknown at 12:01 AM