A Million Suns
by Beth Revis 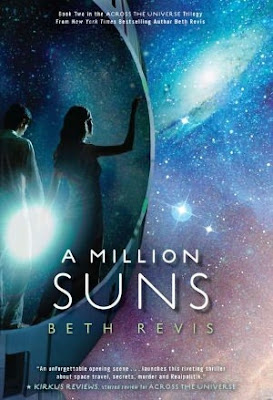 With Eldest gone, it is up to Elder to lead the the people of Godspeed as they (hopefully) continue their journey to Centauri-Earth. But without Phydus this proves extremely difficult. With everyone finally thinking for themselves, chaos ensues and Elder has to find a way to not only get people back to work to ensure everyone has enough to eat, but he also has to deal with a death count that is swiftly rising and figure out how to stop a mutiny. And if all of that wasn’t difficult enough for a sixteen-year-old to handle, he discovers a startling secret about the engine that has been kept since the Plague. His only hope at fixing this new problem comes in the form of a video message left for Amy by Orion. Orion hints at an even scarier secret and a decision that must be made about it, one he feels only Amy can make. Using clues left by Orion himself, Amy and Elder try to figure out what to do before everyone on board tears the ship apart.

A Million Suns is the second book in the Across the Universe trilogy by Beth Revis. Since this is a sequel, I won’t go into too much detail because I definitely don’t want to ruin this for anybody. This book was action packed from the beginning and, once again, I could not put it down! I didn’t think there would be too much information we didn’t already know about Godspeed since A LOT was revealed in the first book, but I could not have been more wrong. The secrets that have been kept on that ship for centuries is astonishing. But it’s easy to see how no one ever found out the truth since 90% of the ship was drugged out of their minds for just as long. I love being shocked and this book definitely did that over and over again.

I really liked Amy in the first book, but in this one she got on my last nerve. She is super selfish and bossy and gets mad at Elder if he doesn’t do what she wants. He tries to make decisions that will make everyone on board happy and will help them survive because that is his job and what he has been preparing for his whole life. It’s hard for her to understand these decisions sometimes because she grew up in a completely different environment with different people and a different type of government. Because of this, she feels that his decisions aren’t right for the people of Godspeed even though he knows them better than anyone. Granted he is young and impulsive and may not always know exactly what to do, but she should have trusted and believed in him like she constantly says she does. I think he does the right thing at the end even if Amy thinks he is crazy for letting it happen.