Review (72): Romancing the Dark in the City of Light by Ann Jacobus

Romancing the Dark in the City of Light
by Ann Jacobus 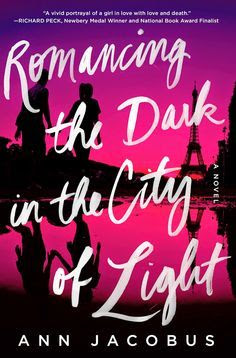 After getting kicked out of her fourth boarding school, Summer Barnes moves to Paris to finish off her second senior year of high school. She has until the age of 22 to graduate from a four-year university or she risks losing a hefty inheritance—which seems easier said than done at this point. She’s felt lost and alone since the sudden death of her father five years earlier and believes that all her problems will go away if she just meets the right guy. Lucky for her, she catches the eye of two; one challenges her and helps her rediscover life’s beauty, while the other leads her down a path of self-destruction. When her damaging behavior manages to alienate everyone, she has to decide if she wants to continue down this road or if her life is worth living and fighting for.

As the title sort of suggests this deals with some dark topics including addiction, depression, and suicide. It is not an easy read so be aware of that if these are things you are not comfortable with or find triggering. As someone who also battled depression at the age of 18, I completely identified with Summer. It was easy to be sympathetic towards her despite how frustrating she was at times because I know what it feels like to be in her shoes. She may not be everyone's cup of tea, but I thought she was very real and appreciated her straight forward voice.

Moony was a great character as well. I can't even image how he has such an optimistic take on life after everything he's been through. I think he and Summer meet just when she needs him most. Kurt on the other had is the complete opposite and encourages her down an even more dangerous path than she is already on. They definitely did not have your average love triangle; it was more of a light vs. dark tug of war that was a lot different than I had expected from how it's written on the cover.

I figured out the twist pretty early on but it was still interesting to see that aspect of the plot unravel. I don’t want to say much because I don’t want to give it away, but I thought it was an intriguing take on inner demons and the mental battle that is depression. Overall, I think this is a great read and I wish there were some others out there like it because depression and mental illness is still something that is not talked about enough.