Cover Reveal: Off the Ice by Julie Cross 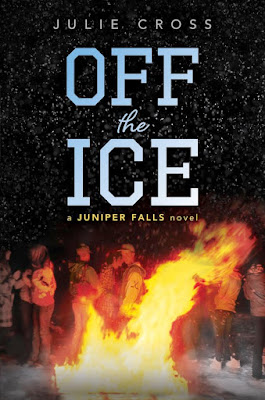 Title: Off the Ice

Junior Tate Tanley hasn't made it off the bench since joining the hockey team as a freshman. But after the Otters' start goalie leaves during a huge game, Tate's got the attention of the entire town. Including Claire O'Connor, who's mysteriously back in Juniper Falls and who he hasn't seen in a year. But Tate hasn't stopped thinking about Claire or what happened the night before she left.

Claire O'Connor should be enjoying college life in the big city. Instead, she's serving drinks to handsy fisherman and taking care of her sick father back in Juniper Falls. And when she spots her best friend's little brother, Tate, playing in a big varsity game, she's thrown for a loop. Tate has grown up a lot: more muscles, more hotness, more...everything. But Claire's responsibility is to her family, and she doesn't have time for boys--especially not hockey palyers. 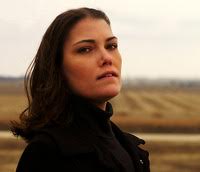 Julie lives in Central Illinois with her husband and three children. She's a former gymnast, longtime gymnastics fan, coach, and former Gymnastics Program Director with the YMCA. She's a lover of books, devouring several novels a week, especailly in the young adult and new adult genres. Outside of her reading and writing credibility's, Julie Cross is a committed--but not talented--long distance runner, creator of imaginary beach vacations, Midwest bipolar weather survivor, expired CPR certification card holder, as well as a ponytail and gym shoe addict. You can find her online via twitter, her personal website, email, facebook, Goodreads, or co-moderating the YA writers section of reddit.