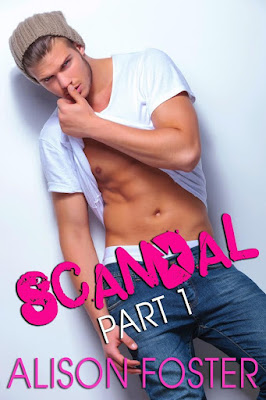 Ella Wade knew working at a website called the Daily Scandal might lead to an interesting summer job after graduating college. She did not know that one big mistake would pull her into the heart of a sleazy world of publicity where truths are worse than lies and murderer is on the loose.

When Ells gives into temptation and sleeps with her stepsister Isabella's ex, her world flips upside down. It doesn't matter that Isabella is dead and that Jaxson Cole wasn't, in fact, her boyfriend but a publicist's stunt to link two of the hottest catwalk models romantically in order to feed tabloid curiosity. The damage is done and with deadly consequences.

Even worse, jax definitely knows things he won't say. Falling for his epic hotness could mean one good screw will screw Ella for a lifetime.

About the Author:
Alison Foster loves reading a good love story almost as much as she loves writing one. She spends her time dreaming up strong heroes and even stronger heroines and she enjoys finding unexpected strengths within her characters when they are in the most unexpected places.

She believes that passion makes the world go round and that a sexy grin is as sweet as candy. She loves interacting with readers, so feel free to drop her a line.