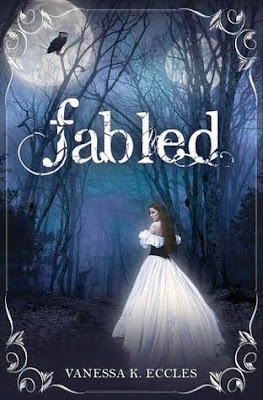 
Rowena thinks the Grimm's infamous podcasts are simply another teen fad until she finds herself trapped in a land of nightmarish storybook characters. She tries desperately to flee Mezzanine and return home, but Dresdem, Mezzanine's wicked monarch, plans to use Rowena's access to her world to bring dark magic and absolute rule into Georgia and beyond.

But when Rowena's dear friend Madeline falls into Dresdem's grasp, her battle with him becomes war, and all hopes of home are temporarily thwarted. With the help of an invisible hero, a beast, and an owl, she sets out to free Madeline from a deadening sleep. But Rowena must become her own hero when she finds herself bound by the kingdom's darkest family. She must make the ultimate choice--align herself with her enemies or live on the run forever.

Hi Vanessa! Thanks for sitting down with us.
Where did you get your inspiration for your book?
I studied the Grimms for nearly a year before I started Fabled. I wrote an academic paper "Fairy Tales Revisited: Cause and Effect of Adult Enchantment" and presented it at the PCAS Conference in 2012. Later, I attended a poster session at my university with my paper, "A Grimm History: Nazi Uses and Abuses of Fairy Tales." It wasn't until I understood the true purpose of folklore that I realized how pivotal and timeless it is. I hope in some small way to have contributed to the literature with Fabled by not retelling what's already been told but building on it with new stories and characters.

What is Fabled about in two lines?
Trapped in a world of dark magic, Rowena must learn how to become her own hero. Easier said than done.

What are you working on now?
I'm currently drafting a young adult southern gothic about an orphan who finds her family in another time, and I'm also working on Book Two of Fabled.

What's your writing process like?
Lots of coffee and a touch of madness. In all seriousness though, I usually sit at the computer with my notebook full of index cards, scribbles, and post its and fuss with characters until we come to some compromise about what will be written.

I also do a lot of scene writing by hand. This ends up being more of a sketch so that when I type I'm more focused on filling in the gaps and adding details.

If you could give any advice to writers what would it be?
Live a life worth writing.

If you could invite your favorite literary character to dinner, who would it be and why?
Probably Jacob Grimm from Tom McNeal's Far Far Away. That's one of my favorite books of all time. I've had a fascination with the Grimms since I spent a year researching them academically. I'd ask him to share all his wisdom and teach me how to tell off bullies in German.

What is your favorite writing quirk?
I like using "O" instead of "Oh." It just seems more appropriate. That large, empty letter sums up the sentiment behind the thought better, I think, and I always image someone pantomiming it when they read. See there, you just did it, didn't you?

Most embarrassing high school experience:
Woah. That's a hard one! I have lived so many lives since high school, as all readers and writers have, but I'll give it a go. I suppose it would have to be when I went on one of the first dates with my now husband. I was sixteen and working every Saturday as a clown. Yep. You read that right. I wore the full get-up too. The makeup, wig, outfit--the works! Somehow the makeup we weren't suppose to use (because it didn't come off well) got mixed in with my stuff that day, and when I left to go on our date, I still had two perfectly round red circles on my cheeks. I looked and felt like a goof. But he eventually married me anyway, so who's the clown now?

Ten Fabled facts:
Once again, thank you for taking the time to talk with us & good luck with your new novel!

About the Author:
Vanessa K. Eccles graduated Troy University with a degree in English. She currently serves as executive editor of Belle Reve Literary Journal and is founder of the book blog YA-NA Sisterhood. When she's not writing or devouring books, she enjoys the lake life with her Prince Charming and their four dogs.