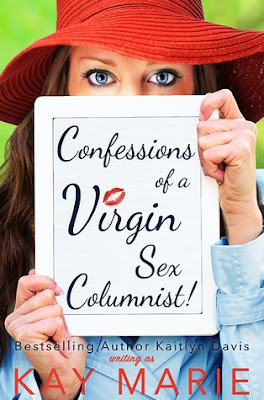 From bestselling author Kaitlyn Davis, writing as Kay Marie, comes a new adult romantic comedy about a girl who'll soon discover that some secrets can't be kept forever, especially those of the heart.

My name is Skylar Quinn, I just moved to New York with my best friend Bridget, and I have a confession. Well, more than one. Okay, quite a few really. Fine, here goes!

Confession #1: I'm a sex columnist. Hold on, that's not really the confession. You see, I'm sort of a virgin...sex columnist.

Confession #3: I've been avoiding Oliver for four years. Or I was until today, because he just moved in. Yes, you read that correctly. He's my new roommate. So that night we've both been pretending never happened, well, we might not be able to keep it a secret any longer.

And trust me, this is only the beginning.


Excerpt:(Scrollbox)
But then a gentle knock sounds against my door.

And there's only one person it could be.

"Skye?" he whispers into the dark.

I could pretend to be asleep, but the alcohol has drowned out my neuroses, replacing them with curiosity. "What do you want, Ollie?"

"I just..." He sighs. My eyes are closed but I can perfectly imagine the way he's running his hand through his hair, messing it up--an unconscious move he doesn't even realize makes my heart melt. Makes every girl's heart melt.

"Don't apologize," I say. It's the closest reference I've made to talking about what happened. And he understands immediately. Understands that I don't want to talk about it--but I doubt he understands why. It's not because I'm embarrassed or hurt or vulnerable. It's because I can't bear to hear the regret in his voice. Because before he did what he did, before that moment, I had the best few minutes of my life. And I don't want to hear that he wishes they never happened.

"Sure." I rollover, finally sitting up. Even in the dark, his eyes shine, glowing blue. Or maybe that's just the alcohol talking.

"It's just, I can tell you're nervous about the new job, but you shouldn't be, Skye. You're a great writer, and well..." He shrugs, scanning the room for a moment. There's a note of honesty in his tone that I rarely ever hear, that I've learned to recognize over the years. "You don't have to have sex to be sexy, Skye. Some people do, maybe, but not you. Never you."

And then he's gone, leaving me alone in the dark with my racing heart.

Always blessed with an overactive imaginiation, Kaitlyn has been writing ever since she picked up her first crayon and is overyoued to share her work with the world. When she's not daydreaming, typing stories, or getting lost in fictional worlds, Kaitlyn can be found indulging in some puppy videos, watching a little too much television, or spending time with her family. If you have any questions for her--about her books, about scheduling an event, or just in general--you may contact her at: KaitlynDavisBooks@gmail.com