Review (53): Daisy and the Front Man by Rebekah L. Purdy 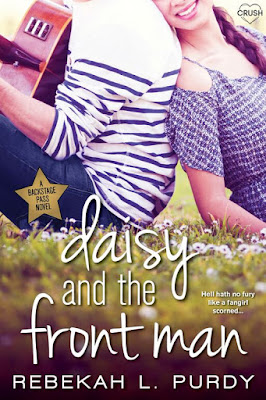 My Thoughts:
Seconds to Juliet is the hottest boyband around and, after winning a concert, Daisy Morris just so happened to snag their front man, Trevin Jacobs, to be her Homecoming date. Too bad he stood her up. Now, almost a year later, she is given the perfect opportunity for revenge: she is spending the summer with her father who happens to be on tour with the band as their bodyguard. She plans on humiliating Trevin just like he humiliated her. As for Trevin, when he meets the gorgeous redhead, he has no idea who she is. But he is intrigued by her icy personality and so when one of his bandmates proposes a bet—one that involves him getting Daisy to fall in love with him by the end of summer—he can’t resist. (Although this is the third book in the Backstage Pass series, they are all written by different authors and do not need to be read in order).

I was excited to read this because this type of story is right up my alley, but unfortunately I did not enjoy the writing style and could not fully immerse myself into it—there was just too much telling and not enough showing. I felt like there was a lot of unnecessary dialogue and the plot was too predictable and cliché (and this is coming from someone who loves clichés).

The characters also missed the mark for me. I didn’t find myself liking either Daisy or Trevin. I think the reason is that by the end, I still didn’t feel like I knew them. Yeah, Daisy has trust issues because of her parents divorce and is still mourning her grandfather, and yes, Trevin is dealing with the fact that he seems to be a disappointment to his father even though he is hugely successful. But these are all things that are told to us, almost just so we will feel sympathetic towards them. Both were just a bit too dramatic for my taste and didn’t feel natural or believable to me.

I did like how Daisy’s relationship with her father progresses throughout the story (but I wish more time could have been spent on this part of the plot). He has been a huge disappointment in her life ever since her parents’ divorce which she has always blamed on him. Throughout the summer she learns some things that change her perspective and it was nice seeing them forming a better, stronger relationship.

Although this wasn’t my cup of tea, I know that my 13 year old self would have enjoyed it. I think this could have been great if it was longer and the proper time had been spent on the development of the characters and plot. Maybe there was just too much trying to happen in a short amount of time? I will definitely be picking up the first 2 books in the series as well just to see how they differ and how the stories fit together.