From Print to the Big Screen: The Host 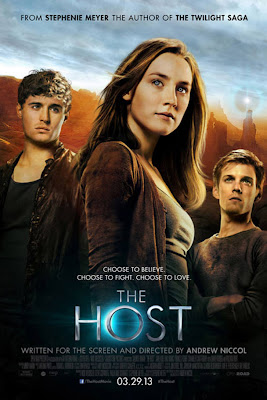 Last month we got Warm Bodies and Beautiful Creatures, this month we get The Host! WOOO!

The film rights to The Host by Stephenie Meyer were actually acquired way back in 2009, but it wasn't until mid-2011/early-2012 that the movie finally started to take form. Better late than never, am I right?

Melanie Stryder/Wanderer will be portrayed by Saoirse Ronan. She has been in some great movies including The Lovely Bones and Hanna. I love her name (though I have no idea how to pronounce it).

Jared Howe and Ian O'Shae will be played by Max Irons and Jake Abel respectively. Irons is probably best known for his role in Red Riding Hood. Abel has been in a bunch of book-based movies: The Lovely Bones, I Am Number Four, and Percy Jackson & the Olympians: The Lightning Thief.

Other actors include Chandler Canterbury as Jamie, Diane Kruger as The Seeker, Boyd Holbrook as Kyle, and Frances Fisher as Maggie.

This is definitely my favorite of Stephenie Meyer's books (it is SO much better than Twilight) and I am so excited for the movie. I am also excited that Andrew Niccol stayed as the director. He has directed some of my favorite movies (In Time & The Truman Show).

I have a great feeling about this one, how about you?