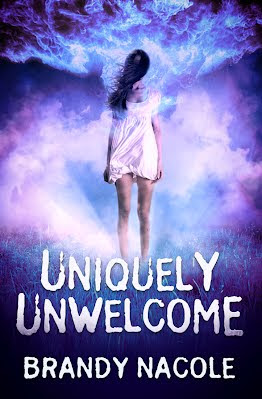 Racquel is unique. The bloodlines of four of the most powerful beings in the Shadow World are intertwined within her DNA. She has never craved attention. She just wants to be able to live as normal life as she can. But she’s about to find that even though she’s uniquely unwelcome wherever she goes, her abilities also make her the best chance the Shadow World has to stop a threat to all the Shadow races.

Once arriving home, Racquel finds that greater evils exist and that the person she cares for most in this world, her half-sister Addie, has been kidnapped along with other Shadow World beings. Racquel finds herself facing horrible odds with those who would rather see her dead than alive.

As her journey continues, Racquel learns more about herself, what she is capable of, and that not every being looks at her as an abomination. Coy, a human captive that Racquel saves from the Vampires, starts showing kindness toward her. Racquel tries putting distance between her and the human boy but as they spend more time together it becomes harder and harder for Racquel to fight the affection she wants and needs.

But will Coy’s friendship and her new found discoveries be enough to help Racquel unravel the strangest mystery that has ever plagued the Shadow World?

Why Book Covers Are So Important


There’s this saying, ‘Don’t judge a book by its cover,’ but let’s face it, it happens. When searching for a book the first thing someone is going to notice is the cover. The cover can then draw that person into reading the synopsis. If the synopsis and the cover draw the reader in, they could possibly buy it or put it on their to-be-read list.

My own personal experience with a cover design came with Uniquely Unwelcome. The first edition cover was a hand drawing of a girl looking up at an eagle. While it was a nice drawing, it just wasn’t up to par with other Fantasy covers. It became very apparent to me, especially after a few readers recommended that I change the cover, that a change was indeed
needed.

Why did I decide to use a hand drawing? Well it was kind of a dream of mine. My husband is a great artist. He’s also my support system. Whenever I’m frustrated, stuck on an idea, or just at a complete loss, he’s there. I wanted to pay some tribute to his support and so I thought I would
have him do my first cover. From there, I would go with the “traditional covers” but for my first publication I wanted to incorporate him in some way.

My lesson from that, sometimes we have to let go of the smaller dreams/goals to reach the bigger ones. I felt guilty I guess you could say when I told him I thought it was best if we changed the cover. Being a great supporter like he is, he agreed. He was honored that I had tried and that I had even used his art to begin with. So together we picked out the cover for Uniquely Unwelcome and then again with Blood Burdens.

About the Author:
Brandy Nacole resides in Arkansas where her imagination runs wild. Her obsession is reading but herpassion is writing. She put her dream of becoming a writer on the back burner and went to collegeto become a psychologist. Three years after endless classes in a field she only felt half satisfied with, Brandy picked up her pen once again and wrote the outline to Uniquely Unwelcome. She finished outher degree in psychology but traded her dream of writing for the degree and put psychology on the backburner. Whenever she’s not reading or writing, Brandy is spending time with her family and friends, throwing around crazy ideas, and laughing through the crazy moments.