GIVEAWAY & Excerpt of Blood and Snow: The Complete Set by RaShelle Workman 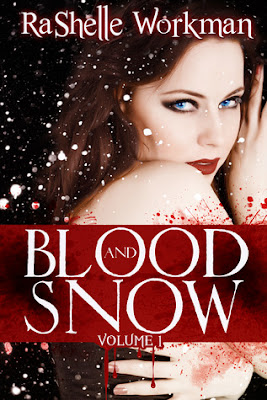 Every thousand years the Vampire Queen selects a new body, always the fairest in the land, and this time she's chosen Snow White.

Snow isn't an ordinary girl. She doesn't know that yet.

When Snow gets bitten by a Hunter, her life is thrown into the whirlwind of change where instead of worrying about what to eat, she has to fight not to drink the blood of fellow high school students. She becomes a revenant--not quite human, not quite vampire.

With the help of an eccentric old Professor, his seven adoptive sons, and her best friend, Snow learns to control her blood craving. Sort of. She drinks a bloodlust tea, but she'd rather drink from her Hunter.

She also discovers a whole other realm, one filled with fairies, dragons, and magic. And not only does the Vampire Queen want her, but there's a pendant called the Seal of Gabriel created for Snow by the Vampire Queen's twin sister. And Snow's supposed to use it to restore balance to all magical creatures. Including vampires.


Excerpt from Chapter 1:
“I’ve had several seriously sexual day dreams about the new guy. Have you seen him?”

“Cin, I didn’t need to know that.” I jammed my math book into my backpack, and slammed the locker door. Cindy rested her petite frame against the locker next to mine.

She snorted. “Cute? No! He isn’t a kitten. He’s hot, sexier than hell, and has a voice that could melt chocolate.”

I had to laugh. Cindy had a way with words. It’d been like that since first grade. We met our first day of school. She’d traded me her Twinkie for my apple with the line, “I don’t think you should eat the apple, Snow White.” We’d been friends almost ten years.

She was different than me in every way, except our blue eyes. She was the epitome of a waif, while I towered over her at five foot eight. She had blond hair that hung long, and was always perfectly styled, mine was a boring dark brown, and came to just below my ears. Her clothes were the latest fashion, as were her nails, makeup, and jewelry, including the heart shaped stud in her belly button. Me, well let’s just say I didn’t own any makeup, and my clothes consisted of baggy jeans, and large old t- shirts, thanks to my seven best friends, and their hand-me-downs. My nails were stubby, and my ears weren’t even pierced. Honestly, I wondered if Cin found me embarrassing sometimes, but I gave her points for sticking around.

“Snow!” She stomped her foot. “Nice isn’t even a proper word. It’s in the same arena as fine, good, okay, and pure.” She shuddered.

“What’s wrong with pure?” I asked, unable to help a laugh, and started toward the gym.

She jogged next to me. “Nothing if you’re Snow White.”

About the Author:
RaShelle Workman lives on a mountain with her husband, three children, and three dogs. From her back porch she can see the city light and imagine... She's the bestselling author of the Dead Roses series (Sleeping Roses is being translated into Turkish, and will be available in print wherever Turkish books are sold in 2014), the Immortal Essence series, and the Blood and Snow series.