That Time I Joined the Circus
by J. J. Howard 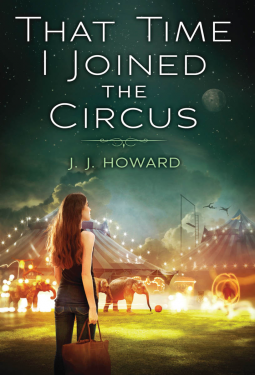 FYI: Slight spoilers in last paragraph. Continue at own risk.

My Thoughts:
After her father is killed in an accident, Lexi finds out that not only is she broke and homeless, but she can’t continue her last year of high school without a guardian. Lexi hasn’t seen her mother since she ran out on her at the age of eight. Almost a decade later, she still hates the woman who left her, but without any other options, Lexi sets out to find her. Her mother is supposed to be somewhere in Florida traveling with a circus. Unfortunately, she hasn’t worked there for over six months and nobody knows where she’s run off to this time. With no where else to go and with no money for food, Lexi joins Circus Europa.

The circus actually fascinates me for some reason. I haven’t been to one in YEARS which is why I love reading books that revolve around them. And there aren’t that many which makes them extra special. That Time I Joined the Circus is adorable. This is a cute, entertaining read, but it also has depth. It has love and self-discovery, but it also deals with some heavier topics like death, loss, and betrayal.

Lexi is a lot like I was during my senior year. She is kind of in a slump and spends all her time at home listening to music or reading. She only has two close friends who are dating which makes it that much harder to make plans since she is the constant third wheel. As horrible as the situation is, I feel like it was the best thing that could have happened to her. Being evicted and penniless forces her to go out and do something. Those four months she spends at the circus completely change her and she comes out so much stronger and confident because of them.

The story is not completely chronological, it bounces around quite a bit from the present to the past and then back. But it wasn’t at all confusing because the date is clearly printed at the beginning of each chapter. I did have a problem with this constant jumping back and forth thing though. I felt like the relationship development lacked a little because of the constant shift. One moment the ring leaders daughter, Lina, is giving Lexi the evil-eye, then we get a ‘flashback’ of Lexi’s life in NY, and then we’re back at the circus and all of a sudden Lexi & Lina are going shopping together and becoming roommates. We never get to see this shift in their friendship, it just kind of happens. This constant back and forth also made the romances in the book problematic for me. I never connected with any of the guys because we never really get to fully know them. First she’s making out with Jamie, then she’s falling in love with Nick, and then Eli pops up and she likes him again. It was just kind of all over the place. I would have liked to see more of Nick because I felt he was the most interesting and the one she truly cared about. I never got the feeling that she actually had any romantic feelings for Eli, it just felt like she went back to him because...well, why not?

Other than the last paragraph, this is a really great debut and I can’t wait to see what else J. J. Howard has in store for us!