Review (51): Such a Rush by Jennifer Echols

Such a Rush
by Jennifer Echols 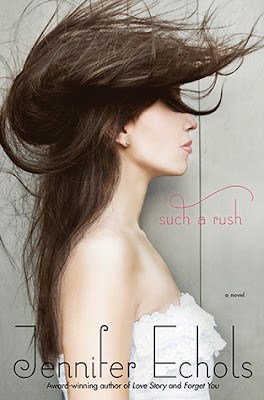 My Thoughts:
Leah has always lived in run down trailer parks that happened to be near the airport. Her mom--when she bothers to stay home longer than a few hours--never stops complaining about the noise, but Leah can’t get enough. She takes advantage of her proximity to the airport and lands a job in the office at the age of 14. But still, this isn’t close enough. She doesn’t just want to watch and listen to airplanes take off and land, she wants to fly. She saves up as much as she can, forges her moms signature, and makes a deal with Mr. Hall for flying lessons. Three and a half years later she is able to get her commercial pilot’s license and can now be paid for doing what she loves. Unfortunately, Mr. Hall passes away before she is able to start working for him. His reckless son, Grayson, who is also just 18-years-old, decides he’s going to run the family business and he wants Leah to fly for him like she promised his dad. Leah refuses, but he isn’t taking no for an answer. He blackmails her into not only working for him, but also into dating his twin brother, Alec.


Such a Rush sucks you in from the start. Jennifer Echols just knows what she’s doing when it comes to contemporary YA. I loved reading about the whole flying and being a pilot thing. I think airplanes are amazing. Being able to get on and, a hand full of hours later, get off in a completely different country or continent is just...wow. Echols describes everything really well and it wasn’t at all that confusing. I had no idea just how dangerous flying one of those things actually is! But it does sound like a great adrenaline rush and I’d be lying if I said I wouldn’t love to try it.

Leah is a great MC; she is strong, smart, and driven. She has an irresponsible mother who thinks she’s the child which has forced Leah to grow up faster than she should have had to. She actually pays most of the bills, including half the rent, because her mom can’t keep a steady job. All of this is done without complaint as she spends every free hour she has working. With help from Mr. Hall she is able to find a way out of this life; becoming a pilot allows her to fly literally and figuratively. I almost wish there were a sequel so we could see where Leah ends up.

And, of course, we also have Grayson who I found to be quite pleasant when he wasn’t intentionally trying to be a douche. His feelings are obvious from the beginning and he says some really harsh things to Leah throughout the novel mostly because he is trying to push her away. I think she forgave him a bit too easily at the end...I would have made him grovel a bit. The tension between them was great. I read this so quickly because I HAD to know where their relationship was going. Besides these two and Mr. Hall, I didn’t really like any of the other characters. Alec was a bit too boring for my taste and Leah’s best friend, Molly, seemed shady from the start.