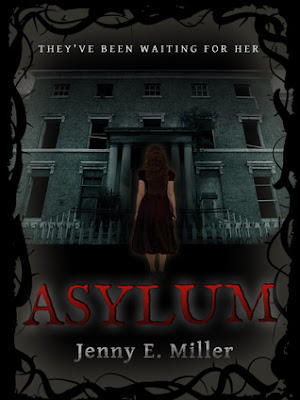 June Foster’s summer is limping along. Her life on a 1950′s farm in eastern Washington is boring–full of milking cows, picking apricots and tending to the chicken coops. Her only friends are her record player and her books. But when gorgeous, turquoise-eyed Frank falls into her world, her life becomes anything but ordinary.

June falls for Frank hard and fast–he’s beautiful, impossibly strong, and capable of things ordinary humans are not. But she’s wary about his father Jonas, a creepy man with an agenda. She should be. Suddenly June is deathly ill, falling in and out of consciousness. When she recovers, June and Frank discover Jonas’s deadly plans for her–and June takes revenge.

Convicted of murder, declared insane and sentenced to life at Washington Pines Sanitarium, June is stuck. Jonas’s plans are reaching her beyond the grave, and she suspects that there’s a lot more going on in the sanitarium than group therapy and electric shocks. Something evil has followed her here, or maybe it was waiting for her all along. If Frank doesn’t break her out soon, she’ll lose her mind–and her life.

Although ASYLUM is fictional, did you do any research to prepare?
I did. I drove down to an asylum a few hours south of where I live. It’s the sister hospital to the one where the book is based in eastern Washington. I just wanted to get a feel for the place. It was raining it had this eerie, vacated feel, though it was chock-full of patients. We couldn’t go inside so my husband and I just drove around the property taking pictures, though when security discovered us milling around they started tailing us!  A couple of days later there was an article in the paper about an incident there—a patient had killed a guard in a rather gruesome way, and then escaped. Pretty creepy. I think they caught him a couple of days later.

I also read several books about old-time asylums and the patients there, most importantly Nelly Bly’s Ten Days in a Mad House. It was frightening, but provided some much-needed perspective about mental health treatment in the last decade.

What scene was most difficult to write? Which was your favorite?
The hardest by far was the scene where we first encounter Frank’s…abilities (I can’t say too much more, without a spoiler). It had to be authentic to the story but not overboard. It was a difficult balance.

My favorite is the scene where June first meets her roommate Clem. Clem is my favorite character, and I think it shows in that scene where they have this banter going. She makes June feel comfortable in the asylum for the first time. She’s like her little sister.

Do you have any advice for young writers?
Write a lot. Everyday, whether it’s journaling or a blog or a novel you’re working on. I know you hear that a lot, but it’s true—you have to write a lot of crap to ever write anything good. And read everyday. Read the genre you want to write, and read a lot of it. Eventually you’ll adopt your own style, but it will really be a mash-up of everything you’ve liked about things you’ve read.

About the Author:
My writing career began in 5th grade, when I wrote a 26-page (illustrated!) novel entitled The Living Room Piano. It was sappy, full of mother-daughter love and tears, and somehow a piano, though I'm not sure where that fit in. I still live in Seattle with my husband, our two hooligans (ages 2 and 4), and one dog who thinks he's a cat. When I'm not writing I'm hanging out with my kids, dancing to Lady Gaga, and whipping up the latest recipe from Bon Appetit. Currently I'm working on the sequel to ASYLUM.