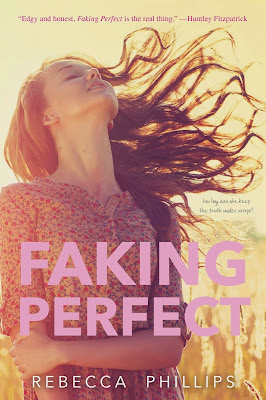 My Thoughts:
Like most high school students, Lexi Shaw is pretending to be someone she’s not. In order to fit in with the popular crowd at school—and ultimately make Ben Dorsey fall in love with her—she needs to look and act the part. This means hiding the fact that her mom is hardly ever around because she is too busy off drinking with one of her boyfriends. And making sure no one finds out what she does with Oakfield High’s resident bad boy in her room at 1 A.M. Oh, and keeping her relationship with her best friend a sort of secret because her popular friends think he’s weird.

Although this seems like it is going to be about the Lexi-Tyler-Ben love triangle, it is really about Lexi’s self-growth. For two years she has tried to be the perfect everything just so she can impress a boy she doesn’t truly know—ultimately losing herself along the way. She has been fixated on her idea of Ben instead of who he really is; she even pushes away two of the only real friends she has because she can not bear to disappoint him. When everything blows up in her face—and someone from her past resurfaces complicating things further—she snaps out of it and allows herself to be, well, herself. Mostly because she doesn’t really have a choice, but also because she finally sees that what you wish for might not always be what you actually want.

Nolan is probably my favorite of all the characters. He does not care an ounce what people think of him and actually takes pleasure in making them squirm when he gets the chance. (Still not sure what everyone’s problem with him is either…) I just really liked his friendship with Lexi because he shows how much he cares in a quiet kind of way. He is her rock and she knows she never has to hide who she is from him and that he’ll always be there for her no matter what. I wish we had gotten to know Tyler more because he is so sweet (albeit a little hotheaded) and could have been a great character. I wanted more Lexi and Tyler scenes that really took the time to develop their romantic relationship.

As for Lexi, she is a bit lost, has low self-esteem and believes that she is not good enough for anyone. She doesn’t have the greatest support system or role models at home—Nolan’s parents practically raised her and her mom doesn’t even bother to attend her high school graduation. I can see why she would want to pretend to be someone else and I applaud her for standing up to her mother.

I think this cover is perfect. The girl in the picture just looks so FREE which perfectly sums up Lexi at the end of the book. (It is the same image used for Heather Topham Wood's Falling for Autumn, but honestly I much prefer the way this one was designed).