Review (59): They Call Me Alexandra Gastone by T.A. MacLagan

They Call Me Alexandra Gastone
by T.A. MacLagan 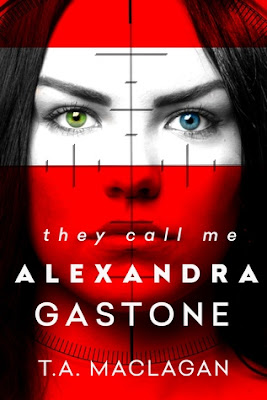 My Thoughts:
Alexandra Gastone is not who she claims to be. At the age of 7, Milena Rokva was dropped off at the secret headquarters of  Perun, a clandestine organization of her homeland, Olissa. There she trained to be a spy and learns everything she needs to know in order to become Alexandra and to infiltrate the life of Albert Gastone, a prominent CIA analyst—the real Alexandra and her parents are killed in a car crash in order for Milena to take her place. The original plan is to have Alexandra finish high school, attend Princeton, and eventually join the CIA in order to help the Olissan government, but when an opportunity presents itself, Perun activates Alexandra earlier than she is ready.

I actually loved this more than I was expecting to. The plot has the perfect amount of action, romance, and suspense. The whole storyline is very well-planned and complex; Perun, the politics and unrest between the two countries, and the other spy agents were all completely believable. The beginning is a bit slow because we are introduced to the characters and their backgrounds, but once the spy stuff actually kicked in, I couldn’t put it down. There were quite a few surprises and plot twists along the way that I honestly never saw coming; the author really throws curveballs that keep you fully immersed in the story. It ends in a cliffhanger and I am hoping there is a sequel because I NEED to know what happens next.

The characters are also really likable and real. Lex is strong and brave but I also felt that she was a bit lost—imagine being abandoned by your father and forced to become a spy before even starting middle school. I admired her resistance of Perun in the beginning, but I can also see why she gave in to the organization and believed in it as much as she did. She uncovers some secrets that really make her question her loyalty and everything she’s been made to believe about her mission; it all kind of tears her up inside and it was interesting to see what she ultimately decides to do. I just thought she was an overall well-rounded character and found it a little funny how bad at being a spy she was sometimes.

Albert, her grandfather, is the nicest and sweetest person ever. There was a point in the story where I was sure he would turn into the villain, but I’m glad this was not the case. As for Grant, he seemed nice enough, but there was something about him that I didn’t particularly like? He was a little too needy for my tastes, but for good reason I guess since she does lie to him quite a bit.

This is a fantastic debut novel and, as I mentioned before, I hope there is a sequel to this story or at least another book by T.A. MacLagan in the near future because I will be picking up whatever she publishes next!