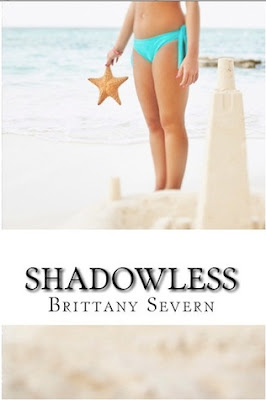 All Quinn Murdock wants is to get her soul back.

With no shadow and no reflection, life in a small beach town pose its risks.

Her supernatural roommates try to keep her feet on the ground, but they also keep her head spinning.

When a human named Conrad Archer moves in, the mystery of Quinn's stolen soul grows deeper as does her affection for him.

But when a conflict arises among the roommates, Quinn realizes they all might be more dangerous than she had originally thought.

Hi Brittany! Thank you for taking the time to answer some questions about your new book! First off, what inspired you to write Shadowless?
There were several things, like for all books. I had my Elemental character in my head for years, but I knew he couldn't be the main character. I let him sit on paper until I could think about where he belonged. I was actually taking a walk one day and the sun was at just the right angle so everyone had three shadows. I thought about how weird it would be to not have a shadow and what would cause it, and Shadowless was born about five minutes after that, the spot for my elemental included.

Which scene was most difficult to write? Which was your favorite?
The most difficult was definitely the aftermath of a death scene, how a character reacts to finally realizing what they've lost. I suffered a large loss in the middle of writing Shadowless and while that experience helped with writing the scene, it was also really difficult to make me relive my own feelings. My favorite was actually the ice cream shop. That's weird now that I think about it since there are so many other scenes, but it's true. I visited a beach town in South Carolina and there was an ice cream show there that I fell in love with. Recreating it for Shadowless was a lot of fun for me.

What are your thoughts on the cover? Did you have any input in the design?
I'm really pleased with how the cover turned out. I created it myself and had the input of a few friends before finally settling on the final design and look.

Is there a specific place you like to write?
I write at my kitchen table but I don't like it. I don't have an office to write in, so the kitchen is it for now. Some day I hope to have an office with a writing desk and an amazingly comfortable spinning chair.

Are you excited about any new books being released soon?
Yes! I can't wait for Requiem by Lauren Oliver, Isla and the Happily Ever After by Stephanie Perkins, and The Madness Underneath by Maureen Johnson.

Now time for some quick this or that:
Once again, thank you for sitting down with us & good luck with your new novel!