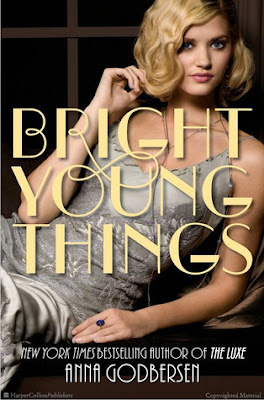 My Thoughts:
Cordelia Grey and Letty Larkspur have always known they don’t belong in the small Midwestern town they grew up in. Together they decide to run away to New York City. Letty dreams of making it big--of seeing her name in lights--but so does every other girl in town. Unfortunately for her, some are willing to do almost anything to make it happen, things she isn’t comfortable with. Cordelia is in search of a father she’s never met. When she finds him, she is thrust into a world of money, glamour...and danger. She befriends Astrid Donal, her half-brothers girlfriend, who becomes her confidante. The three girls experience what the Roaring Twenties had to offer in NYC together, as well as apart.

I became interested in the Roaring Twenties my junior year of high school when we studied it in history, so I was super excited to read a historical fiction novel based in that decade. I’m not sure how accurate any of the information actually is, but it was still cool to read about. I particularly love how during this time women aren’t expected to be prim and proper at all times. Despite being set in this decade though, it mainly focuses on the three teenage girls and what they are going through which makes this relatable and relevant to teen girls now.

I also really liked that the chapters alternated between the three girls perspectives. It was nice because each was seeing a completely different side of the city. We get to see what it might have felt like to be a cigarette girl through Letty. Cordelia’s, as well as Astrid’s, perspective gives us a first hand look into the rich, powerful, and dangerous lives of the bootleggers. Each have very distinct personalities and are all very likable. I always end up having a favorite character by the end, but I don’t think that happened this time. They’re all great!

I adored Anna Godbersen’s Luxe series and this one is just as great. If you haven’t had a chance to read either, get to it! They aren’t too heavy on the historical fiction so these are great even if you aren’t into this genre.