From Print to the Big Screen: Beautiful Creatures 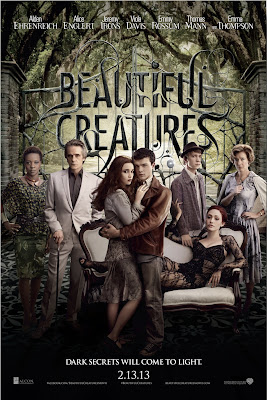 So if you haven't already heard (which is doubtful) another one of our beloved YA books has been turned into a movie.

The rights to Beautiful Creatures by Kami Garcia & Margaret Stohl were purchased by Alcon Entertainment in 2009 and filming began Spring 2012. It took over 3 years to complete, but it is finally almost here. The movie premieres on Valentine's Day, this Thursday the 14th!

The main character, Ethan Wates, is played by Alden Ehrenreich who apparently got discovered by Steven Spielberg at a batmitzvah. How cool is that?

Alice Englert, a New Zealand born actress, is Lena Duchannes. I believe this is her first major role which is awesome.

I have been a fan of this series since the beginning and can't wait to see it all on the big screen. Even though I'm excited, I'm still apprehensive because we all know how difficult it seems to be to portray any book well when it is being turned into a movie. Unfortunately, things get changed or taken out which leaves many unhappy. I'm going to try not to expect too much from this so that I'm not completely disappointed. It worked for me when I watched The Hunger Games, so hopefully it will this time too.

Who else is excited? Have you gotten your tickets already? And how gorgeous is that movie poster by the way?