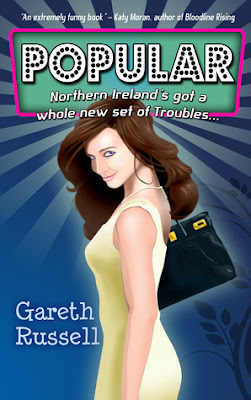 On the first day of September, 16-year-old Meredith Harper rules over the teen it-crowd of Belfast, Northern Ireland. But beneath the surface, Meredith's complicated web of manipulative lies and self-serving intrigue are slowly beginning to threaten her social position and she finds herself being challenged by handsome Mark Kingston, the only guy in the school who's always hated her. In a world where nothing stays secret for very long, Meredith and her friends will need all their skills to guess who's in, out, coming out, going up, going down, dating, cheating, lying and trying to cope...

Judging a Book By Its Cover
The old saying "Never judge a book by its cover" is supposed to be a reminder to all of us that we shouldn't make judgements based on appearances. It's a noble idea, certainly--but particularly when it comes to what books we pick, that saying can be misleading. Realistically, most of us are attracted to a new book by its cover and publishers therefore spend a great deal of time designing artwork for their books. If they don't, then they certainly should, because a bad cover can sink a good book. I love the visual; I love things that look good and show artistic flair. So I've always wanted good covers for the "Popular" series and, luckily, I've been able to compare a few of them to see what works and what doesn't.

Before my first book “Popular” came out in 2011, it had already gone through two cover re-designs. It’s important to get these things right. I found out how true this was when the final cover – a sunny yellow background, with the title in hot pink and a girl clutching a pink handbag – was unveiled. Some people, particularly guy friends who had read the book before it was published, hated it because they felt it was a cover “only girls could like” and that it ignored the book’s male characters. Some girls didn’t like it, either. Some thought it didn’t capture “Popular’s” dark sense of humour. Some didn’t like the handbag (seriously – people notice every tiny little detail when they really look at a cover). Some thought it looked too much like a thousand other covers they’d seen. Others thought it made the book look too young, but then there were others who absolutely loved it. The ones who liked it thought that it was bright, eye-catching, fun, summery and memorable. It’s hard for me to judge that first cover impartially, because as a first-time author, you have such a huge surge of protective affection for your first book. Looking back on it, though, and I can say I definitely wouldn’t have picked it. Maybe I just don’t like yellow?

When “Popular” was re-issued with a new cover in 2012, we wanted to get a cover that could be re-worked and re-imagined for all six books. That’s how long the “Popular” series will run for and I’m so grateful that I have the opportunity to do this: to take the characters through their full journey with you – its readers, who are the most important part of any book’s life. When you have readers writing to you saying that the characters you’ve created feel like their friends, then that’s one of the best feelings out there. But this also meant that I now had to work on a cover with my new publishers that could be adjusted for each book – we wanted to create covers that had an individual flavour for each new story, but which would also make it clear to people that these books were part of a series. If you have a look at the new blue and green covers for “Popular” and its sequel, “The Immaculate Deception,” then hopefully you can see what I mean! We also had to work with finding a way of making sure that the cover seemed right for the age “Popular” is aiming at. Originally, I wrote “Popular” for the 16-24 year old age group – so, really, the upper-end of the young adult market. However, it soon became clear that people younger than that, and older than that, were reading it and enjoying it. Our first cover (the yellow one) had cleverly tried to make the book accessible to younger readers; we now had the challenge of trying to make it attractive in a new way.

Excitingly, the new publishers wanted heavy input from me and that’s such a rare treat for an author. The new covers were designed to be slightly more gender-neutral and we took the decision to put one of the boys, Cameron Matthews, on the cover of book two, to make it clear that this isn’t just a series aimed at girls. (Even though writing the female characters, like Meredith, Imogen and Kerry, was an amazingly fun process for me as a writer.) We decided to go for art work, rather than a photograph, and David Cameron, our designer and artist, really did a fantastic job with them. Drawing characters on the front is always a risk, though, and some readers prefer not to have that, because it might interfere with their imagination. That’s why some readers still prefer the original yellow cover and they’ve let me know that through my Twitter – @garethrussell1. It’s always great to hear from readers and “Popular’s” have been amazing.

The importance of a cover is caused in part by the fact that you never get a second chance to make a first impression. A cover is what can entice a reader in or put them off entirely. It can make a book seem completely different to what it’s actually like or it can perfectly capture the feel of the novel. Equally important, however, for me, is a book’s blurb. A bad blurb that doesn’t capture what the novel’s really about can put many readers off buying it; it’s so, so important to get a good, catchy blurb that doesn’t misrepresent the story, but lets readers know that they’re going to enjoy this book. A good blurb should tell you why the book is worth reading, but it should also leave a hint of mystery – making you want to read more. I hope the blurbs for 2012’s “Popular” and “The Immaculate Deception” do that. These books have been fantastic to write and wonderful to experience again through my readers. Many of the characters in it, I suppose, are actually a bit like a book with a gorgeous cover – particularly Meredith, Blake and Cameron. They look amazing, but what’s really interesting (hopefully!) is the story that they tell, the deeper and deeper you delve into it. In the end, it’s still what’s behind the cover that matters the most.
_______________________________________________________________________


About the Author:
Gareth Russell is 26 years-old and currently lives in Belfast, Northern Ireland. He studied History at the University of Oxford and his first history book, “A Thing More Glorious” is out this year. His first novel “Popular” was published in 2011 and a new edition was published in 2012, along with its sequel “The Immaculate Deception.” A third book in the series, “The Age of Vengeance,” is due out later in 2013.